Apache's (NASDAQ:APA) North American onshore segment is a crucial part of its future, thanks to the company's prime position in several promising shale plays. However, that segment had a bit of a down year in 2016 due to weaker oil prices. Meanwhile, the company's international and offshore segment delivered steady results thanks to its stable production profile and higher margins, which was just what the company needed. While those factors meant that the international and onshore segment was Apache's best performer in 2016, North American onshore could wrestle that title away as early as next year.

As the following slide shows, Apache entered 2016 expecting a down year from its North American segment along with a rather flat year from the international and offshore business: 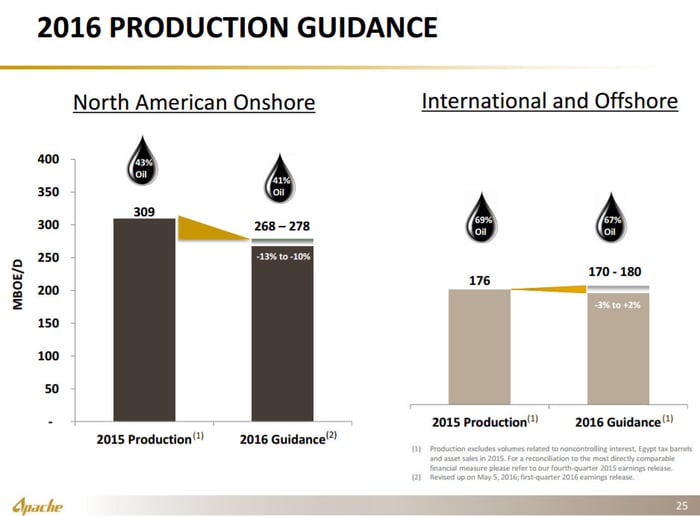 On a positive note, Apache has largely outperformed those expectations through the third quarter. Production at its North American segment has come in higher than anticipated thanks to robust well results and capital efficiency gains. That said, the company only expects production to come in at the high end of its production guidance range, which still implies a double-digit decline.

Meanwhile, production in its international and offshore segment has come in about as expected, with the company on pace to hit the midpoint of its guidance, implying roughly flat production year over year. While that result might not be anything to get excited about, what is enticing is the segment's lucrative cash margins: 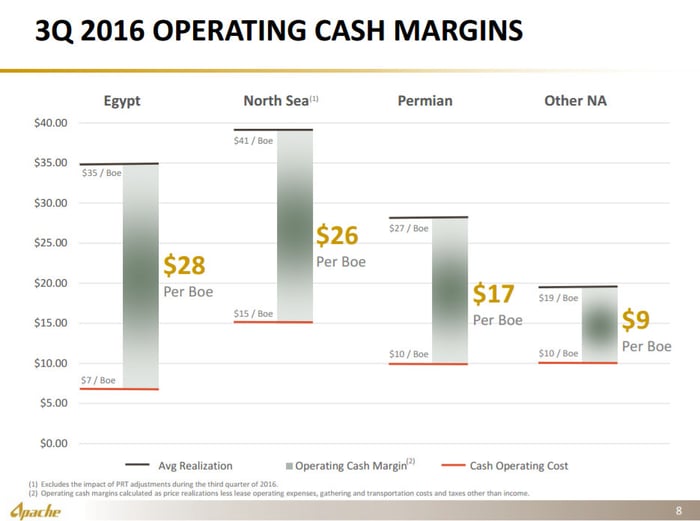 As that slide shows, the segment's margins are almost $10 per barrel of oil equivalent (BOE) more than the company earns in the Permian Basin, and almost triple the margins of the company's other assets in North America. Those higher margins provided Apache with much-needed cash flow in 2016.

Can it maintain this momentum?

While the solid performance of Apache's international and offshore assets stood out in 2016, stable performance is about all the company can expect from the segment going forward. While the company can grow production from these assets through step-out exploration and development, that growth will not move the needle for Apache.

North American onshore, on the other hand, has remarkable growth potential, driven by the recent Aline High discovery. The company is in the process of ramping up its activity levels in that play, which should return the North American segment to a growth trajectory by the second half of next year. While Apache has not put out an estimated production growth rate, it has an enormous inventory of future drilling locations. In fact, Alpine High could have more than 3,000 future drilling locations while the company could have an even larger inventory throughout the rest of its Permian Basin acreage. On top that, the company has a large acreage position in the SCOOP/STACK plays of Oklahoma as well as an extensive position in Canada's Duvernay and Montney shale plays.

While those plays do not get as much press as the Permian, they could be significant growth drivers for Apache in the future. For example, production from Devon Energy's (NYSE:DVN) STACK asset is up 38% over the past year, while higher-margin oil output from the play is up 184%. Devon Energy sees that growth continuing due to play's world-class resource potential. In fact, the STACK and the Permian Basin are the two plays Devon intends to use to return the company to growth mode in 2017. While Apache only has 50,000 net acres in the core of the STACK compared to Devon's more than 400,000 net acres, this play could still be a major driver for the company.

Meanwhile, the shale plays of Western Canada also have tremendous upside potential. ConocoPhillips (NYSE:COP), for example, currently estimates that it controls 1 billion BOE of resources in the region that it can economically produce as long as oil is around $50 per barrel. Furthermore, ConocoPhillips believes it could double this resource potential in the future through ongoing appraisal efforts. That bodes well for Apache because, like ConocoPhillips, it has a more than 3 million acre legacy position in Canada, which suggests it could likewise have enormous resource potential in the country.

The stable production and free cash flow from Apache's international and offshore segment were just what the company needed this year to help it manage through lower oil prices. Those factors clearly made that segment the company's best performer this year after North American onshore suffered from lower margins and production declines. That said, just because North American onshore had a down year, does not mean it has a dim future. Quite the contrary; that segment has the potential to drive the company's results for years to come due to its enormous untapped resource base.