It's fairly typical for a stock to decline when it's hit by an analyst downgrade. However, Nordstrom (NYSE:JWN) took an unusually hard fall last week following a downgrade by JPMorgan Chase analyst Matthew Boss. Nordstrom stock plunged nearly 9% on Friday and has lost a stunning 18% of its value in the span of a week, erasing more than three months of gains. 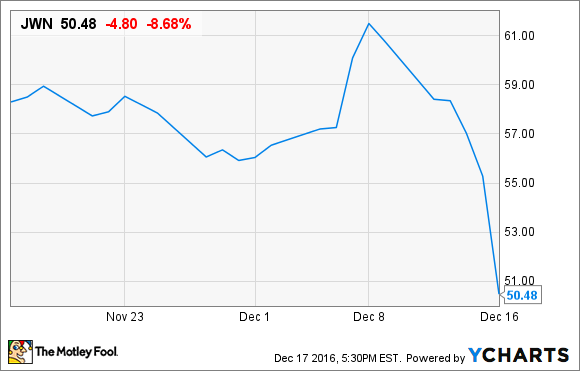 Nordstrom stock was probably vulnerable to a pullback due to its strong performance over the past six months. Nonetheless, the severity of its drop last week was surprising in light of the fact that the analyst report didn't uncover any significant new evidence. This suggests that investors may be overreacting to the ugly headlines.

JPMorgan analyst Boss and his team downgraded Nordstrom stock to a "sell" rating on Friday and cut the price target to $48: well below the prior closing price. In meetings with the analysts, Nordstrom's management reportedly said that traffic trends for full-line Nordstrom brick-and-mortar stores were at the worst levels since 1972.

On the other hand, the JPMorgan analyst team expects full-line sales to continue declining. Management reportedly sees no "silver bullets in the barrel" looking ahead to next year. As a result, on a companywide basis, Nordstrom is planning for flattish comparable store sales next year and ordering merchandise accordingly.

The analysts think that even with better inventory management and recent cost cuts, Nordstrom won't be able to grow its earnings per share without faster sales growth. As a result, they are projecting that EPS will remain roughly flat for the next two years relative to 2016.

While investors took this analyst downgrade as a sign to dump Nordstrom stock, management didn't say that conditions were getting worse. Instead, the company continues to see the subdued traffic trends that have been prevalent since Aug. 2015.

Sales trends at full-line Nordstrom stores have been weak for more than a year. Image source: Nordstrom.

These negative trends will cause EPS to decline this year. Last year, Nordstrom produced adjusted EPS of $3.32, whereas its current outlook calls for adjusted EPS of $2.85-$2.95 in fiscal 2016.

On the other hand, the company has crushed analysts' earnings estimates in each of the past two quarters. That has allowed it to raise its guidance range twice. Five months ago, Nordstrom had been estimating that adjusted EPS would be just $2.50-$2.70 for the full year.

Additionally, consumer sentiment has improved in the past couple of months. Moreover, after a year of unfavorable weather for apparel retailers, more seasonal weather could lift sales at Nordstrom and its peers in Q4 and beyond.

Nordstrom's management wouldn't make bullish predictions for the next year -- or even for the quarter -- based on a few weeks of modest sales improvement or short-term weather forecasts. Thus, investors may be reading too much into the pessimistic tone that management took when speaking to Boss and his analyst team.

This isn't your father's Nordstrom

A second reason why the current pessimism about Nordstrom stock is overblown is that the company has already dramatically reduced its dependence on U.S. mall-based full-line stores. Five years ago, more than 70% of the company's revenue was generated in its full-line Nordstrom stores, most of which are located in malls.

Since then, it has invested billions of dollars in growing its e-commerce business, expanding the Nordstrom Rack off-price chain, and moving into Canada (where malls are doing lot better). As a result, full-line stores in the U.S. account for just 49% of Nordstrom's revenue year-to-date.

In the future, Nordstrom will have an even more diversified business. And while e-commerce sales will probably always be less profitable than in-store sales, the Nordstrom Rack chain has the potential to be more profitable than most full-line stores. For comparison, TJX's mature T.J. Maxx and Marshalls chains routinely generate operating margins of 14% or more. Nordstrom hasn't earned margins like that for a decade.

A silver bullet is "a simple and seemingly magical solution to a complicated problem," according to the Oxford English Dictionary. It's not surprising that Nordstrom management doesn't see any "silver bullets" to boost performance next year. Getting sales and earnings back on track will take hard work.

While Nordstrom may continue to face difficult conditions in its full-line business, the company can also respond to these challenges. For example, if sales continue to decline, Nordstrom can close some stores to drive traffic to its best-performing locations. That's particularly true along the West Coast. More than a quarter of Nordstrom's full-line stores are in California, with more than a dozen in the Los Angeles area alone.

Nordstrom owns or ground-leases more than 80% of its full-line stores, so it may have opportunities to bring in cash by selling stores that it wants to close. That's exactly what it did earlier this year with its store at San Diego's Horton Plaza.

As Nordstrom slows its store expansion and focuses on cost containment in the next few years, profitability should improve. Investors certainly shouldn't expect TJX-like margins. But a return to high-single-digit margins -- which seems plausible without counting on a rebound in mall traffic -- could drive EPS as high as $5 within a few years.

That leaves investors with a sizable margin of safety in Nordstrom stock at current prices. The stock's 2.9% dividend yield should help long-term investors remain patient as Nordstrom hones its response to the tough competitive environment.