After three consecutive quarters of losses and five consecutive quarters of revenue declines, memory chip manufacturer Micron Technology (NASDAQ:MU) expects to report revenue growth and a profit on Wednesday. The company has been struggling with weak prices for its DRAM and NAND chips, driven by industry oversupply. That situation has now reversed, and Micron expects its momentum to continue into 2017.

Investors have been betting that Micron would soon turn things around all year. The stock is up around 40% year to date, although it's still down roughly 45% from its peak in late 2014. Micron's financial performance can be extremely volatile, determined mostly by supply and demand, and its stock often follows suit. 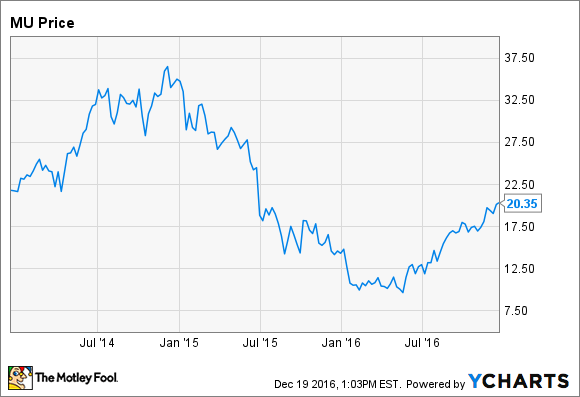 More important than Micron's fiscal first-quarter results will be the company's outlook. Micron boosted its first-quarter guidance in late November, saying that it expects industry supply growth to slow during the next few quarters. During a ceremony in Taiwan earlier this month celebrating the company's completed acquisition of Inotera Memories, Micron CEO Mark Durcan said that the next year to 18 months looked positive for the company. Investors will be expecting Micron's guidance for the second quarter to reflect this optimism.

When Micron reported its fiscal fourth-quarter results in October, the company's guidance was underwhelming. It expected first-quarter revenue to come in between $3.55 billion and $3.85 billion at the time, with non-GAAP EPS between $0.13 and $0.21. That represents year-over-year revenue growth of 10.4% at the midpoint, but an earnings decline. Non-GAAP EPS was $0.24 during the first quarter of last year.

Micron's earnings guidance was even more disappointing than it seemed due to a couple of accounting changes Micron announced along with its results. Beginning in the first quarter, the company will begin backing out stock-based compensation and the amortization of acquisition-related intangibles from its non-GAAP results. A change in the depreciation schedule of DRAM capital equipment will also reduce Micron's costs, with the net effect of these two changes being a roughly $150 million quarterly reduction in Micron's non-GAAP expenses.

On a comparable basis, rolling back these accounting changes, Micron was guiding for non-GAAP EPS between breakeven and $0.08 during the first quarter. That's a steep decline that raises questions about Micron's ability to translate increased revenue into increased profits.

Micron allayed some of these concerns when it announced a boost to its first-quarter guidance. The company now expects revenue of $3.975 billion during the first quarter, along with non-GAAP EPS of $0.28. This new guidance represents revenue growth of 18.7% and earnings growth on a reported basis. But without the accounting changes, Micron's new non-GAAP EPS guidance would be just $0.14, still well below the company's results from last year.

Inotera could provide a boost

Micron closed its acquisition of Inotera Memories in early December, which means that Micron's fiscal second-quarter guidance should include Inotera's results. Micron expects the acquisition to be immediately accretive to DRAM gross margins, EPS, and free cash flow, although exact figures weren't given. Investors should expect to hear more about Inotera's impact on Micron's results during the company's conference call on Wednesday.

The big question is how much Micron's earnings will rise due to the improving market for memory chips. The company expects a significant year-over-year decline, on a comparable basis, during the first quarter despite higher revenue. Micron produced a loss during the second quarter of last year, so year-over-year earnings growth is basically guaranteed during the second quarter. But if earnings growth continues to lag revenue growth, the company will have some explaining to do.

Micron's business is cyclical, which means that neither the good times nor the bad times last forever. Micron is now emerging from the bottom of the cycle, and the company is optimistic that the next few quarters will produce solid results. Whether the company can live up to the expectations implied by its soaring stock price remains to be seen. We'll know more on Wednesday when Micron reports its first-quarter results.