GM's inventories of many of its car models have swollen dramatically despite big incentives as more buyers choose SUVs instead.

General Motors (GM -3.52%) will idle five of its U.S. factories for one to three weeks each in January, as it confronts high inventories that have drawn concern from analysts.

GM is cutting production of a slew of car models

As first reported by Automotive News, GM will idle factories in Michigan, Ohio, Kansas, and Kentucky to reduce inventories. GM had an 86-day supply of new vehicles in the U.S. as of Dec. 1, up from 70 days' worth a year ago.

A GM spokesperson told Automotive News that the company is aiming to get supplies back down to about 70 days' worth.

Supplies of some individual models were significantly higher for some models. Here are the days' supply numbers as of Dec. 1 for the products made at the five factories that will be shutting down. For most car models, about 60 days' supply is generally considered ideal. 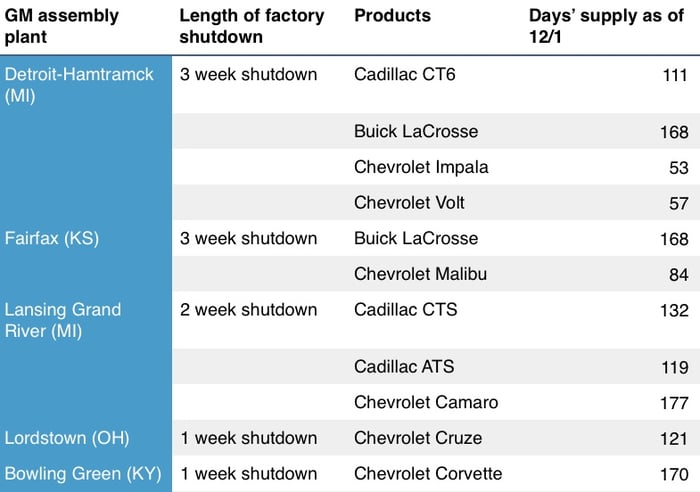 Notice anything about the vehicles in question? They're all cars, for starters. With gas prices cheap and car-based crossover SUVs much improved over their truck-based predecessors, buyers have been choosing crossovers and trucks over sedan models in steadily increasing numbers.

GM isn't having much trouble selling most of its SUV and truck models. But many of its sedan models (and its Camaro and Corvette sports cars) are piling up. (As for the ones that aren't, like the Chevy Volt, GM will presumably adjust its production mix before and after the shutdown to ensure that dealers continue to have an ample supply.)

The production cuts should help bring inventories into line. But the situation raises a big question: How did this happen?

Why GM is now resorting to factory shutdowns

Did GM misjudge the overall health of the U.S. market? Or did it simply misjudge demand for car models versus SUV and truck models?

GM's inventories as of Dec. 1 were the highest they'd been in eight years -- since November of 2008, in the midst of the economic crisis. The huge inventory was despite generous incentives: GM's spending on incentives in November was almost $4,900 per vehicle, up about 35% from a year ago. (The overall industry average was up about 19% year over year.)

Given those inventory levels, the production halts are no surprise. While production halts are never good news for the workers affected, in this case they're probably the right move for GM's long-term health. The alternative would have been to crank up incentives even further, crushing what remained of GM's profit margin on these products.

The current Chevrolet Corvette may be fiercely fast, but its recent sales have been stuck in the slow lane. Vette sales are down over 11% this year through November. Image source: General Motors.

That would have been bad for near-term profits, of course. But it's also bad in the longer term. Big incentives mean lower average transaction prices, and that in turn tends to show up as lower resale values two or three years down the road.

Why does that matter? Lower resale values would make GM's leasing offers on its new models less competitive. Leases are priced based on the expected residual value of the vehicle at the end of the lease term, which in turn is estimated from the prices the current crop of used cars are fetching at auction. The lower the resale value, the higher the lease payments need to be. (That's one reason why GM has been reducing its sales to rental-car fleets, by the way.)

Long story short: In a backhanded way, the production cuts are good news for GM investors as they should have a positive effect on the carmaker's bottom line, particularly over the longer haul.

Another sign that the U.S. new-car market is stalling

Stepping back a bit, GM's move to cut production in response to swelling inventories is yet another sign that the U.S. new-car market is probably past its peak. That's no surprise, and it's not a big concern for long-term-minded shareholders. But it's another hint that at some point, GM's profits -- like those of its rivals -- will come under pressure as demand falls.