Stocks on sale are getting harder and harder to come by recently. For anyone who likes to buy value stocks, or something with a little margin of safety, the pickings are getting scarcer by the day, and those left selling at discounts are probably selling at a discount for a reason.

There are still some pockets of value left in the market, though, and three companies that look to be selling at decent discounts today are Novo Nordisk (NYSE:NVO), Valero Energy (NYSE:VLO), and T. Rowe Price Group (NASDAQ:TROW). Here's a quick look at why investors looking at getting some value out of the stocks they buy should take a look at these stocks.

An overreaction for a high profit company?

2016 has not been kind to shares of Novo Nordisk. Year to date, the company's shares are down close to 40%. From a short term perspective, those declines could be justified as the company reported slowing sales, pricing pressure from pharmacy benefit managers, and lowered guidance for the year. When looking over a longer term time horizon, though, this looks like a time to be investing in the diabetes specialist.

Here are a couple things to consider when it comes to Novo Nordisk's results so far this year. Even though the company did lower its long term operational profit outlook from 10% to 5% in large part because of pricing concessions for U.S. insurers and pharmacy benefit managers, we're still talking about a company that generates almost absurd rates of return on capital and a propensity to reward shareholders with dividends as well as buying back shares at a decent rate over the past 10 years. It should also be noted that the company instituted an interim dividend, so what appears to be a dividend cut on this chart is just a dividend policy change. 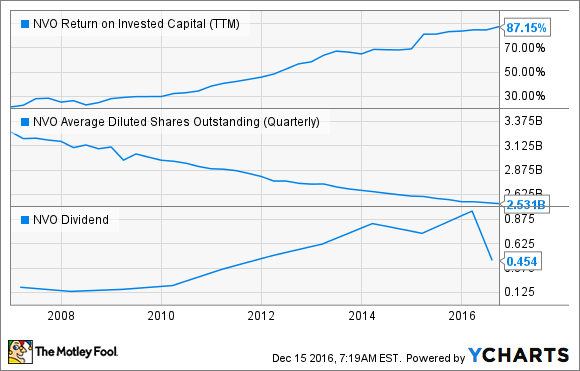 Pricing pressure, especially in the U.S. market, is most certainly going to have an impact on the company's profits, especially for some of its older drugs as insurers try to reel in costs. It's also worth noting that Novo Nordisk owns 46% of the global insulin market, and the growth in diabetes globally doesn't look to be slowing down any time soon.

With shares currently trading at a PE ratio of 15 -- not a massive discount in the broader sense, but certainly worth watching -- it looks like Novo Nordisk is a dividend stock worth a deeper dive.

On the losing side of oil prices

Whenever oil prices rise, the consensus is that oil and gas stocks across the board will do well. That isn't necessarily the case for oil refiners, though. Refiners generate profits from the price spread of crude and refined products. Typically, price changes for refined petroleum products like gasoline and diesel will lag behing the price change in crude oil by at least a few months. This means when oil prices fall, the price spread between the two widens -- great times for refiners. Conversely, as crude prices rise, that price spread narrows -- lousy for refiners. Right now, we are in that latter part of the cycle, so margins across the board for refiners are much weaker than normal.

This has really taken its toll on Valero's stock this year, as the company's shares have declined as much as 30%. There are some other factors hitting the company as well, such as much higher than normal costs to comply with the U.S. EPA's renewable fuels standard. Management has said that it will likely cost $750 million this year to buy ethanol credits and comply with the regulations. As a result, last quarter's results were down 54% year over year.

Here's the thing when it comes to refiners, though. It is a notoriously cyclical industry. While we can expect to see earnings suffer while crude prices rise, those gains will likely flatten out as the oil market digests things like OPEC's production cuts and cheaper production costs for U.S. based shale. As they do, Valero's earnings will return to normal and investors will likely realize this is a company that rather consistently generates double digit returns on equity and has a good -- although not perfect -- record of paying an ever growing dividend.

At an enterprise value to EBITDA ratio of 6.0 times, shares of Valero look pretty attractive. It should be noted that the company's stock never trades at a high EV/EBITDA multiple in the first place, but couple that price with a dividend yield of 3.6% and it looks like a pretty compelling dividend stock.

A tale of two appetites for risk

T. Rowe Price is a bit of a dichotomy. The company's founder, T. Rowe Price himself, generated his reputation as a great money manager by investing in lots of smaller companies with what he viewed as having "fertile fields of growth." That tradition of getting in on the ground floor continues today as the company has a substantial venture funding segment of the business that invests in early seed rounds. The thing is that this kind of investing requires a pretty big appetite for risk. For every Facebook or AirBnb (two companies in which T. Rowe Price was an early round seed investor) there are dozens of flops and busts that you have to be willing to take on to bag those unicorns.

So it's rather peculiar that T.Rowe Price, with its massive appetite for risk, runs its own business in a rather risk averse manner. Unlike many other asset managers that use debt to juice returns, T. Rowe Price has a pristine balance sheet with no long term debt and 20% of its total assets are in cash and short term investments. I guess the best way to reconcile these seemingly opposite ideals is that by being very risk averse with the running of its own business, it allows it to take those riskier bets with its investments and not be put into financial strain if they don't pan out.

It also helps that T.Rowe Price doesn't need help from debt to juice its returns, because it already generates pretty strong returns on equity and enough cash flow to pay a rather handsome dividend -- with the occasional special dividend -- as well as buy back loads of its own stock. 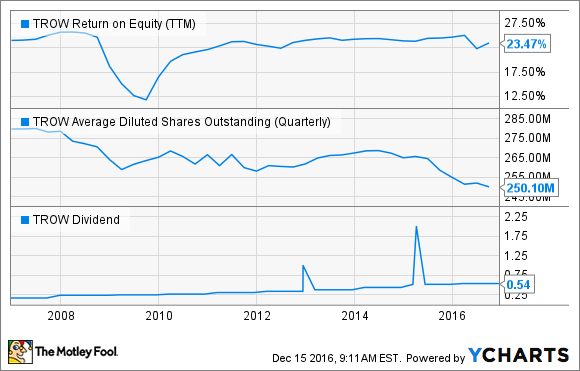 By just about every traditional valuation metric, you can't really say that T.Rowe Price is a cheap stock. Its price to earnings ratio today stands at 17 times, which is pretty middle of the road. That being said, 17 times earnings gets you a company with a great history of employing T. Rowe Price's original investment philosophy for strong returns, maintaining strong financial discipline in house, and a propensity to reward shareholders. That is something worth paying a little extra for, and makes T. Rowe Price look like a relatively well priced stock.