Berkshire Hathaway (NYSE:BRK.A) (NYSE:BRK.B) CEO Warren Buffett may be as famous for his aphorisms as he is for his love of Coca-Cola.

He jokes that he's "one quarter Coca-Cola," referring to his anatomy, not his holdings, as he drinks at least five cans of Coke or Cherry Coke a day.

Buffett is big backer of the stock as well, as Berkshire owns more 9% of the company and counts Coke as its second-biggest holding after Wells Fargo. Buffett's son, Howard, even sat on its board before announcing his retirement recently. In many ways, Coca-Cola is a classic Buffett stock. The company has a huge brand that, along with its distribution network, gives it an economic moat, and its business is focused on recurring small purchases that happen in an up or down economy.

Though Coke made many early investors rich -- it was one of the best-performing stocks of the 20th century -- the stock's reputation his taken a hit in recent years. As the chart below shows, it has significantly underperformed the S&P 500 and Berkshire Hathaway over the last five years. 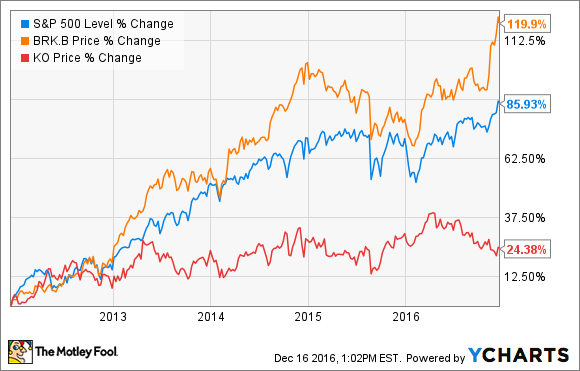 Buffett's quote above looks especially relevant today. Coke is set the hand the reins to a new CEO as COO James Quincey replaces Muhtar Kent at the helm on May 1, 2017.

Quincey's anointment is no surprise, as Coke had signaled that he would replace Kent when Kent retired. Quincey has led the company in various regions, including Europe and Mexico, and became COO last year, but his job running Coke's iconic portfolio of brands may be more difficult than that of his predecessors. Coca-Cola today faces several challenges that won't be easy to overcome.

It's no secret that Americans are drinking less soda. Volume sales of the fizzy beverages have fallen every year since 2004, dropping 1.2% last year as per capita consumption reached a 30-year low. As health concerns have mounted, Americans have flocked away from excess sugar in drinks like Coca-Cola, and sales of diet soda have fallen even faster -- trends towards organic and natural foods seem to be worse for artificial sweeteners and drinks like Diet Coke, which are perceived to be loaded with chemicals.

Coke brags that it has gained market share for 26 straight quarters in North America in the Non Alcoholic Ready To Drink market, but that figure ignores the fact that many consumers have moved on to coffee drinks available at Starbucks and other chains. Starbucks has seen U.S. comparable sales growth of 4% or better for more than 20 quarters in a row.

To counter sluggish growth, Coca-Cola has adopted a few key strategies. It's begun selling smaller-volume drinks at a higher price-per-ounce, borrowing a page from tobacco companies, which have also raised prices to counter falling consumption. That strategy has helped pad the bottom line and given consumers lower-calorie options, but its potential is limited.

The company has also gone on a shopping spree in the hopes of diversifying away from its core soda brands. In recent years it's purchased alternative beverage brands like Zico coconut water, Gold Peak tea, and Suja Life juice. It also took stakes in Keurig Green Mountain, which was bought out, and Monster Beverage. Coke now has more than 500 brands and derives 36% of sales from still beverages. However, the company may have missed an opportunity to diversify into food as its rival Pepsico (NASDAQ:PEP) has done well with brands like Frito-Lay and Quaker. As a result, Pepsico has outperformed Coke in recent years.

Coke's organic revenue is still growing, up 4% so far this year, but a strengthening dollar has weighed on financial results, as have structural changes. Return on Invested Capital plummeted all the way from 21% in 2008 to 9% last year as the company spent on acquisitions while earnings remained stubbornly slow to grow.

As per-capita consumption has fallen in key markets, the company has also been confronted with an increasing number of soda taxes. Four cities in the U.S., including San Francisco and Boulder, Colo., passed soda surcharges on Election Day, and Philadelphia did so earlier this year. A number of countries, including Mexico and several in Europe, have also moved to tax sugary beverages. It's an idea that's gaining currency and is likely to present continued headaches for Coke, as the company has already mounted significant lobbying efforts against such measures. With the lobbying push, big soda, unsurprisingly, has often drawn comparisons to big tobacco.

Can Quincey cut the mustard?

James Quincey is stepping into a morass of regulatory battles, changing tastes, and slumping returns. There may be no one more qualified for the job, but the status quo will not be enough to revive Coca-Cola's stock. In recent years, the company has acted incrementally -- cutting, costs, making acquisitions, launching new marketing campaigns -- but it hasn't been enough to reinvigorate its core brands.

Coke may need to think bigger. For instance, scientists are working to make a calorie-free soda that tastes like the real thing, using sugar substitutes like stevia. Such a beverage could capture consumers who have been ditching sodas because of calories or artificial flavors. Pulling off such a feat won't be easy, but an innovative push like that is more likely to generate long-term growth than Coca-Cola's current strategy.

Investing in food is another such option. Though management has resisted it in the past, the company recently considered taking a stake in yogurt-maker Chobani before backing out.

It's clear what Warren Buffett meant by his "ham sandwich" comment -- Coke's brands are so powerful and its business is so simple that the company is essentially a profit machine.

But that logic only applies to a market when soda sales have organic long-term growth ahead, not one in which public sentiment is turning against beverage-makers.  As Buffett may already know, today's consumers don't want any old ham sandwich. They want organic, grass-fed porchetta on a fresh-baked ciabatta with garlic aioli and house-made pepperoncini.

Today's Coca-Cola requires a strategy beyond the stewardship of a perpetual profit machine. If Quincey is going to deliver for investors, he needs to aim for a higher standard than an ordinary ham sandwich.