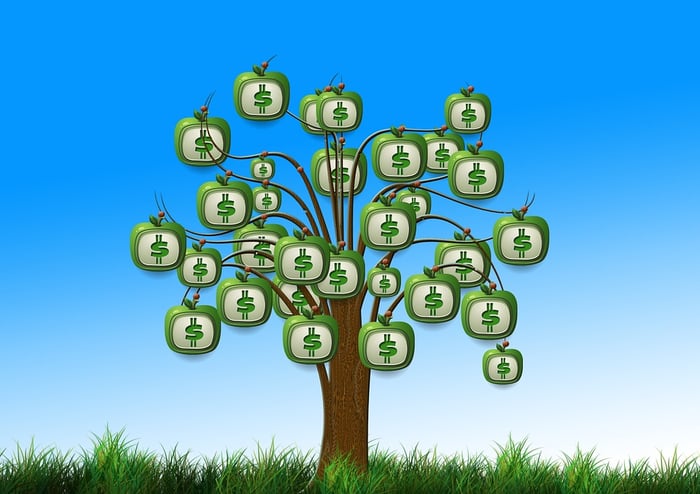 Shares of Skyworks have stayed nearly flat this year due to concerns about slowing smartphone sales, rising competition in the RF space, and the company's dependence on Apple. Skyworks doesn't disclose exactly how much revenue comes from Apple, but Oppenheimer & Co. previously estimated that figure could be as high as 40%. Those headwinds caused Skyworks' long streak of double-digit annual sales growth to drop to the single digits in the second quarter this year before turning negative over the past two quarters.

However, Skyworks believes that new 4G devices (which require more of its chips per device), set-top boxes and media gateways that act as "hubs" for smart homes, and new chips for new IoT markets like connected cars will boost its sales growth over the next few years.

That's why analysts expect Skyworks' revenue and earnings to respectively rise 7% and 10% this year. Skyworks currently trades at just 15 times earnings, which is much lower than the industry average of 22.

YY is a Chinese social platform that lets viewers engage with broadcasters in real-time activities like music shows, online dating, online gaming, and e-learning. Viewers can sign up for paid subscriptions to channels or buy virtual gifts for their favorite broadcasters, and YY generates revenue by retaining a cut of each sale. The company has also expanded into adjacent markets like e-commerce and the Twitch-like Huya gameplay broadcasting platform.

Shares of YY have declined more than 30% this year due to concerns about the Chinese economy and skepticism regarding lesser-known Chinese internet brands. Yet YY's sales surged 40% annually last quarter, thanks to robust demand for the platform's live-streaming services. Gross margin fell 20 basis points annually, to 39%, but GAAP net income still surged 156% as non-GAAP (adjusted) net income improved 84%.

Analysts expect YY's revenue and non-GAAP earnings to respectively rise 32% and 15% this year. That top-line estimate represents a slowdown from 60% sales growth last year, but the company's non-GAAP earnings growth should easily top last year's 2% growth. Those growth estimates indicate that YY is pretty cheap at 13 times earnings, which is much lower than the industry average of 50 for internet information providers.

Apple is the most valuable company in the world, with a market cap of $625 billion. Yet it remains surprisingly cheap at 14 times earnings, which is much lower than its industry average of 17. The stock has advanced about 11% over the past year, but it's been weighed down by concerns about year-over-year sales declines in iPhones, iPads, and Macs.

With sales of all three core hardware lines peaking, it's unclear how the tech giant will keep growing. Its main strategy has been to grow its services like iTunes, Apple Music, Apple Pay, and Apple Care, but those platforms aren't growing rapidly enough to offset its slowdowns in hardware. That's why analysts expect Apple's revenue and earnings to respectively rise just 6% and 8% this year.

But with $20.5 billion in cash in the U.S. and over $200 billion saved up abroad, Apple can inject plenty of capital into research and development or expand inorganically to diversify its business away from its core iDevices. It can also boost buybacks or double its dividend to attract more investors. Apple probably won't become a high-growth play anytime soon, but the worst-case scenario is that it merely becomes a "mature tech" play like IBM.

Skyworks Solutions, YY, and Apple are all trading at discounts to their industry peers, but that doesn't necessarily make them conservative stocks. Skyworks is still heavily tethered to Apple and the mobile-device market, YY faces challenges from bigger Chinese ecosystem players like Weibo, and Apple could face years of stagnation if it "diworsifies" with bad investments or acquisitions. Therefore, investors should weigh these weaknesses against their low valuations to see if these companies are worthwhile long-term investments.

Before investing in stocks, here's some information to help beginners choose the right ones.