Energy storage is coming, but we don't yet know how companies and customers will make money off it.

As the cost of batteries, fuel cells, and renewable energy more broadly come down, it's becoming clear that energy storage will be a big business in the future. It can smooth out the variability inherent with wind and solar, provide valuable services to the grid, and move cheap renewable energy created during the day to hours when it's most needed.

It's becoming more clear that energy storage will be valuable, like wind and solar energy a decade ago. What's not yet clear, though, is the answer as to how energy storage will generate value for investors. Creating a business model that can exploit the advantages of energy storage to make money will be key. And the industry may be perilous for those on the bleeding edge.

Powerwall 2 on the outside of a home. Image source: Tesla.

Where energy storage has value

Generally, we know where energy storage has value. Rocky Mountain Institute has defined 13 value drivers from energy storage, including self consumption of solar, backup power, and energy arbitrage (lowering electricity consumption during high cost times and moving it to low cost times). These are the items Tesla (TSLA -2.43%), Sunrun (RUN -0.70%), and SunPower (SPWR 3.08%) have used to justify a lot of the limited amount of energy storage that's been installed today, but those businesses are essentially in pilot mode. 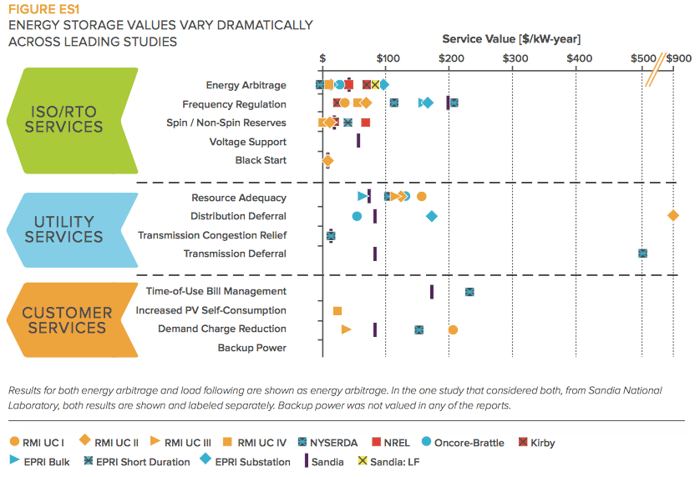 If the chart above is correct, the bigger sources of value may come from the utility side of the ledger. Transmission congestion relief and distribution investment deferral are two of the most valuable uses of energy storage, but they're driven by utility needs and go through regulators. For developers, you can't just build a battery and bid it into the open market without regulators driving the utility to buy services from you.

There's value from energy storage for the entire grid, from utility to customer, that much is clear. The question is, who pays for this value and how? Here's a few viable options.

Value to the home and businesses

Looking at energy storage from the customer side, the justification will be all about cost reductions. For homeowners, that may be energy arbitrage in states like Hawaii and now California. Commercial customers can justify energy storage through reducing demand charges, a fee the utility charges based on peak demand even if it's only for 15 minutes per month. These are both ways to lower payments to the utility, which has caused utilities across the country to change rate structures to stem the loss of customer electricity demand.

A potential way forward would be utilities finding a way to build rate structures that allow customers to install solar and energy storage on site, but still incorporate into the grid. This would keep people tied to the grid and create a win-win situation. But finding a solution that works for everyone won't be easy.

To understand how a utility sees energy storage you have to go back to a utility's business model. A utility's incentive is to grow electricity consumption and increase their asset base from which to charge customers. That means they have incentive to keep customers from owning energy storage and would rather own storage assets themselves.

The problem for utilities is if they push back too hard against customers owning energy storage, the more they'll push companies to develop business models to make energy storage economical. This could even push residential customers to eventually leave the grid and commercial customers to find alternatives to buying electricity from the traditional utility, something that's already taking place in Nevada. So, utilities will want to create rate structures that allow them to partner with renewables, energy storage, and customers. This may be easier said than done and there's no easy answer to how utilities should react to energy storage.

Solar + storage may have a bright future

When you look at the dynamics, you can see that there are a lot of complex incentives clashing in energy storage. But one area where the technology can bring value is when combined with intermittent renewable energy. This could take hold in distributed resources or at the power plant level.

One idea being pushed by solar installers is for small energy storage systems in a home or business, known as a distributed energy storage asset, be compensated to balance the grid on a localized level. They could store energy when it's cheap and allow the grid to draw energy when demand is high. Hundreds or thousands of distributed assets could be tied together to create a network of assets with the grid providing a price signal and a third party -- like Tesla, SunPower, or Sunrun -- reacting to maximize the value of their distributed assets.

On the utility side, we could see solar or wind projects bid energy projects into the grid but provide attached energy storage. This could reduce the volatility going to the grid, reducing the need for spinning reserves, and can ease the effects of the duck curve (a spike in demand in the late afternoon when the sun goes down and people get home from work). If long duration energy storage technology improves enough we may even see solar projects save energy for nighttime. That would truly be a game changer.

Who will get energy storage right?

You can see that creating a business model to take advantage of energy storage will be difficult. But there are a few things we can deduce from the state of the industry and the history of adjacent technologies like solar panels.

The first thing is that battery manufacturers and companies that don't have a discernible technology advantage won't likely generate much value for investors. Batteries are a commodity and have been low margin for decades. That's why nearly every company -- with the exception of Tesla -- has decided to focus on how to use the battery and not manufacturing of batteries. The same goes for other energy storage technologies.

Utilities will also have a hard time generating a significant amount of value from energy storage. In some cases, they may be able to install storage to offset other investments, but that will mean a smaller asset base to rate base, which hurts the business long term. There's just no clear model for utilities in energy storage outside of getting regulators to allow them to own distributed battery systems in homes and businesses and, like rooftop solar, that will be a tough sell.

That leaves developers buying commodity energy storage products and selling services to the grid or customers. This is where I think the true financial opportunity lies. It could take the form of residential solar companies up-selling storage and then controlling its functions to maximize value, making money through a fee or revenue-sharing model with customers. This may involve aggregating thousands of energy storage systems and sell the resources into the grid, something an aggregator could do but a homeowner or single business couldn't. Or the solution may be as simple as software to tie a battery to the utility's price signals and then sharing the revenue with a battery owner.

Travis Hoium owns shares of SunPower. The Motley Fool owns shares of and recommends Tesla Motors. Try any of our Foolish newsletter services free for 30 days. We Fools may not all hold the same opinions, but we all believe that considering a diverse range of insights makes us better investors. The Motley Fool has a disclosure policy.