Investors already knew this was going to be a tough quarter for Fitbit (NYSE:FIT). The company warned as much in early November when it released third-quarter earnings and issued soft guidance for the holiday quarter. Management directly acknowledged that there could be "softness in overall demand," which sounds pretty scary. Beyond that, Charge 2 ramped up faster than expected and pulled forward some sales to Q3, while the company was suffering supply constraints around Flex 2 that threatened to leave some money on the table in the form of unfulfilled demand (roughly $50 million worth).

A month and a half later, with holiday shopping in full swing, it looks like Fitbit may be having a hard time moving inventory.

Pacific Crest analyst Brad Erickson released a research note yesterday (via Tech Trader Daily), urging investors to proceed with caution since Fitbit inventory levels appear to be a little too high for comfort. The analyst has been conducting retail inventory checks and believes that days of inventory are at elevated levels within the U.S. (almost 18 days). A range of five days to 10 days would be a lot more encouraging, as that would require retailers to restock their inventories at higher volumes next quarter.

Erickson is encouraged by sales of Blaze and Alta, but thinks that Charge 2 is faring poorly and now suffering from particularly high levels of inventory. Flex 2 demand is also weak, according to his checks. As a result, Erickson is reducing his estimates for next year, dropping his revenue forecast from $2.19 billion to $1.99 billion, and his bottom-line estimate from $0.25 per share to just $0.01 per share. 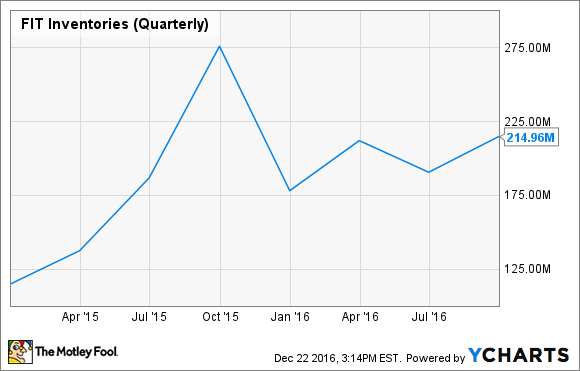 We're talking about channel inventories here, and bloated channel inventories are never a good thing. Companies recognize revenue upon selling into distribution channels, and ideally the channel moves the products and needs to restock. That's why Erickson is warning investors about the first quarter, which is normally when you would expect retailers to restock inventory following the holiday shopping season. But if Fitbit's products are sitting unsold on shelves, that won't happen.

For what it's worth, here are some comments from CFO Bill Zerella regarding channel inventory expectations from the last earnings call.

The issue is not having adequate inven... at least our expectation is not have adequate inventory in the channel to support peak demand, which is why we see an impact of about $50 million in terms of our revenue for the quarter.

And lastly, in terms of channel inventory by the end of December. We think all the inventory levels will be normalized. There will certainly be strong sellthrough -- or we expect it to be strong sellthrough from Charge 2, which we drove into the channel in higher-than-expected quantities at the end of Q3. But that will all normalize and we will exit the year with a pretty clean channel, based on our expectations.

I think the good news is, we've got adequate Charge 2 in the channel as we head into the holidays. We'll be able to meet demand, and to the extent our marketing programs are able to generate any additional demand, we will be able to meet it.

Zerella also noted that Fitbit entered the fourth quarter with "higher levels of Charge 2 inventory than we had of Charge HR coming into the holidays last year." All told, Fitbit is acknowledging that it was starting out with plenty of Charge 2 inventory, which lines up with Erickson's checks and belief that Charge 2 is selling poorly. It seems Fitbit's marketing team didn't generate enough demand.