GoPro Inc's (NASDAQ:GPRO) stock has fallen so far over the past year that management has to be thinking about what the company's future looks like, and competitors may be wondering if an acquisition might make sense. In many ways, a buyout could be a win-win for GoPro and a potential buyer. GoPro comes with no debt and a great brand, and the right buyer could make GoPro's products more usable for consumers.

Looking at the landscape for cameras, drones, and action sports, Garmin Ltd. (NASDAQ:GRMN), Apple Inc. (NASDAQ:AAPL), and DJI are three logical buyers for the company. 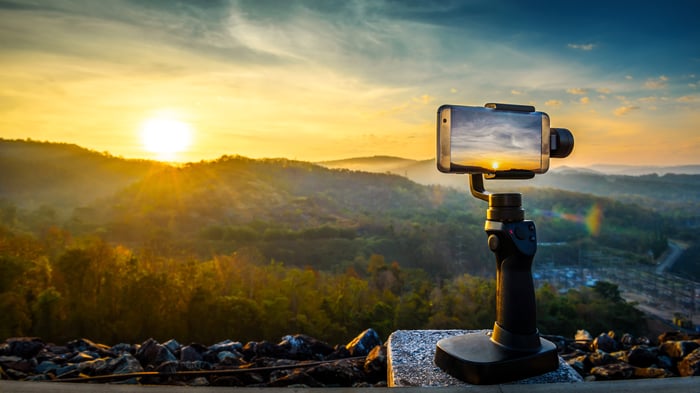 Garmin is one company that's tried to move into GoPro's market with its own action camera. The move makes some sense given Garmin's position as a standard in GPS and watches for athletes, but it's still a stretch, and there's no indication the company is going to gain significant market share.

Buying GoPro would give Garmin a great brand and leading market position in cameras, but it could also integrate well into its other products. Smartwatches are now able to connect with GoPro cameras (although it's a difficult process), and Garmin could integrate its own smartwatches with GoPro cameras. For action sports users in particular, it would make a lot more sense to push a physical button on a watch to take a picture than trying to tap a touch screen on an Apple Watch.

Garmin's watches and GoPro's cameras are going after the same customer base, and if they had some integration, there could be a lot of cross-selling opportunities. And that makes Garmin a good fit for GoPro.

GoPro is trying, and failing, to do a lot of the things Apple does well on its own platform. GoPro is trying to make it easier to transfer content from cameras to the cloud, edit photos and videos, and share them. Why not sell to Apple, a company that does all of those things extremely well?

The acquisition could follow along the lines of Beats by Dre, which was an adjacent market for Apple but fit nicely with its focus on music. GoPro would augment the focus on photos and video but bring a more action-oriented product to the lineup.

It would also be interesting to see what Apple could do with GoPro's products and technology. Apple has been rumored to be working on virtual reality, and GoPro has a leading VR capture camera setup in its lineup. Drones could even be of interest, although GoPro hasn't done particularly well in the drone business.

Apple doesn't make a lot of acquisitions, but the strong brand of GoPro and products that line up well with the company's photo and video focus could be a nice fit. And the $1.5 billion to $2.0 billion check Apple would have to write for the company wouldn't even make a dent in its balance sheet.

When GoPro came out with a drone, it was taking aim at DJI, the world's drone leader that designed GoPro out of its drones a couple of years ago. But GoPro's drone (literally) crashed, and DJI's position on top of that market has been solidified.

Where DJI doesn't have a big presence is in stand-alone cameras, but it would like to get there. DJI has built a suite of camera and stabilization products aimed at high-end photographers and videographers, but they're not very mass market. Adding GoPro's products, and the brand, could open up a new set of customers and fill out the product line.

DJI could also choose to wait for GoPro to continue stumbling, but the risk is that GoPro will eventually build a drone system that's a real competitor to DJI. That may not be a risk worth taking.

Is a buyout on GoPro's horizon?

Given GoPro's struggles to generate consistent revenue and earnings and the competitive pressures on all of its product lines, it may be time for GoPro to consider looking at a buyout. The company would be an attractive asset for some purchasers, and it may take the pressure that comes with being a public company off of its operations, opening up new opportunities for innovation. Time will tell if management eventually agrees.