Anyone who is price conscious about their investments is likely seeing all this recent market euphoria and getting a little queasy. Sure, it probably means that stock values in current portfolios are looking good, but it also means that there are fewer stocks to buy at reasonable prices. Luckily, though, there are still some small bastions of value in the market today, even in stocks sporting high yields.

Three companies that stand out as cheap are America's automotive giants General Motors (NYSE:GM) and Ford Motor Company (NYSE:F) and nitrogen fertilizer specialist Terra Nitrogen Company LP (NYSE: TNH). Here's a quick look at why these companies look inexpensive despite the rapid run-up in the market.

Determining whether a company within a cyclical industry like autos can be challenging. Since most of the shorthand valuation metrics we use for stocks are based on earnings, you have to reconcile the company's current valuation multiple with where it is in its earnings cycle. For example, a company with a valuation multiple that is high but is at the bottom of the industry cycle may be cheap because growth is right around the corner. Conversely, a company at the top of the earnings cycle may have very low valuation metrics, but may not necessarily be cheap as earnings decline.

This latter situation is where we find America's largest automotive manufacturers. Today, shares of General Motors and Ford trade at meager price-to-earnings ratios of 4.2 times and 7.0 times, respectively. At the same time, though, it would appear that we are right around the top of the cycle in terms of auto sales as we're starting to see things like building inventories and higher incentive spending, two signs that sales are starting to flatten out.

If we were to follow the logic of industry cycles, then we can likely assume that sales are set to decline. As that happens, valuation metrics will revert to historical averages, which are 10.9 times and 12.9 times for General Motors and Ford, respectively (I should note that General Motors historical average is only after reemerging from bankruptcy, so it's a small data set). Based on where the company's valuation stands today, it would take some large declines in profitability before reverting to the mean.

Another thing to keep in mind, too, is that the U.S. isn't the only market these companies serve, and we're seeing some modest gains in Europe and China for both companies through either improving sales or selling higher-margin vehicles like trucks and SUVs. Considering the size of both companies North American operations, gains from outside North America aren't going to completely offset any sales decline here. However, at today's valuation, it doesn't really have to.

Investing in General Motors' or Ford's dirt-cheap valuations may not be the complete slam dunk. Sales and profits are going to likely hit a few speed bumps coming up, and it will likely mean a decline in profits. That being said, General Motors and Ford pay dividend yields of 4.2% and 4.7%, respectively. So even if you have to wait around a while for any gains in stock price, there is certainly enough value in that dividend to make it worth the wait.

The other side of the cyclical spectrum

While automakers are riding high, the agricultural products business is in the trough of its own industry cycle. Like so many other commodities, there was a massive ramp up in production capacity a few years ago to try and feed China's voracious appetite for every natural resource imaginable. As that growth rate slowed, the market for things such as fertilizers found out there was way too much production capacity. As a result, prices for these commodities started to decline. Since May 2012, the price of urea has declined from $496 per ton to just $177 per ton in July of this year. 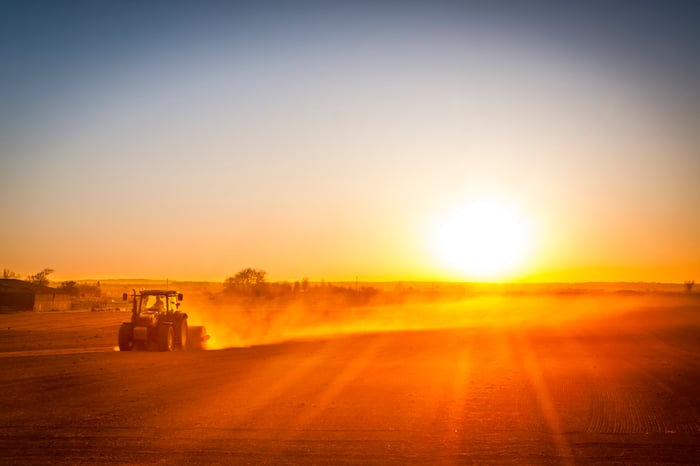 There is another wrinkle to this story, though, and that is the emergence of cheap domestic natural gas. Natural gas can be used as a feedstock for making urea and other nitrogen fertilizer products, and its low cost means that some producers are still making a decent profit. Terra Nitrogen Company is one of those players. Despite lower fertilizer prices being their lowest in over a decade, Terra Nitrogen still produced a 32% net income margin over the past 12 months. This just goes to show how efficiently the company runs its business and how the company is still able to generate strong cash flows that can be returned to shareholders.

So here we have a company that is still solidly profitable at a very low point in the nitrogen fertilizer business. In fact, Terra Nitrogen's management really went out of their way to describe in detail why the market is likely going to get better from here. Even though all signs are pointing to better times ahead for the fertilizer business, shares of Terra Nitrogen still sell for a modest enterprise value-to-EBITDA ratio of 6.7 times. The company may have a variable payout, but on a trailing-12-month basis where the payout was low, we're still looking at a distribution yield of 9.9%. That seems like an awfully cheap high-yield stock.