It's been a long time in the making, but Bank of America (NYSE:BAC) could soon eclipse one of its principal profitability targets.

At a conference earlier this month, Bank of America CEO Brian Moynihan reaffirmed that one of the bank's goals is to generate a 12% return on tangible common equity, also noting that the bank is making progress on this front. Yet, given that many its competitors routinely earn 13% or more on their tangible common equity, Bank of America's shareholders would be excused for wondering when it will surpass its own target.

The good news is that this could happen soon, and particularly if interest rates continue to rise.

To bridge the gap, Bank of America thus needs an added $700 million in net income each quarter. That equates to a 16% increase from the third quarter of this year, which was one of its best performances since the financial crisis.

That's a big leap. It's hard for any company to boost earnings by 16%, but particularly for a company that's already the size of Bank of America.

Fortunately, the North Carolina-based bank has one big thing going in its favor -- the direction of interest rates.

As I've discussed in the past, Bank of America estimated at the end of September that it would earn an additional $5.3 billion in net interest income over the next 12 months if short- and long-term interest rates increase by 100 basis points, or 1 percentage point. That equates to $1.3 billion on a quarterly basis. Even after taxes are deducted, that's comfortably enough to eclipse a 12% return on tangible common equity.

Since Bank of America released its estimate, long-term interest rates have already increased by the needed amount, rising from 1.6% at the end of September to 2.6% today. That's a difference of, you guessed it, 100 basis points. 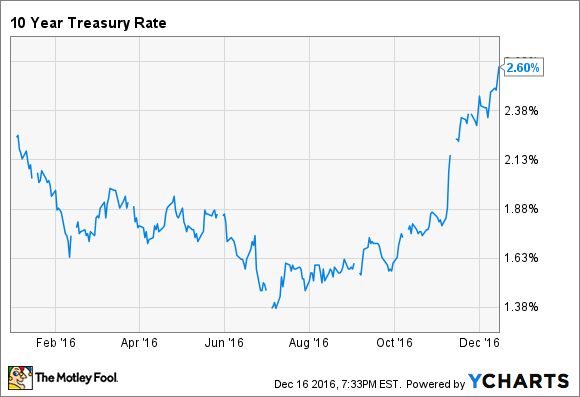 Short-term rates are headed in the same direction. Last week the Federal Reserve boosted the Fed Funds rate, the primary short-term interest rate benchmark in the United States, by 25 basis points. And the minutes from its latest monetary policy meeting suggest there could be three more such hikes in 2017, which would bring the total increase in short-term rates to 100 basis points as well.

While Bank of America's profitability target has been a pipe dream for most of the past decade, that could soon be about to change.