Microprocessor giant Intel (NASDAQ:INTC) pays a solid dividend of $1.04/share on an annual basis. As of a recent check of the stock price, that works out to around 2.81% yield. Although the company is far from high-yielding in absolute terms, it's solid relative to what its large-cap, dividend-paying semiconductor peers pay. 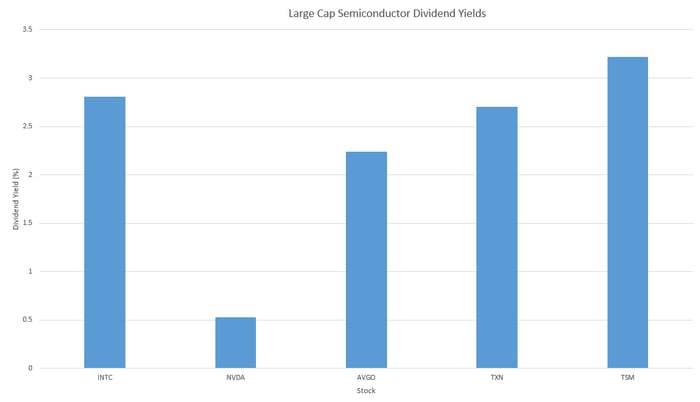 Intel has generally done a good job of delivering annual dividend increases to its stockholders. There was, however, a 10-quarter stretch between August 2012 and November 2014 during which the company didn't boost its dividend (presumably since Intel's revenues were declining as it boosted operating expenses).

I believe Intel will raise the dividend again to try to further boost the attractiveness of its stock, particularly to more income-oriented investors.

Let's look at by how much Intel could reasonably raise its dividend.

Dividend is paid from free-cash-flow

A key metric to look at when trying to analyze a company's dividend potential is its trailing-12-month free cash flow per share. Dividends are paid from a company's free cash flow, so the more free cash flow a company generates (and can generate on a consistent basis), the more cash it can put into stockholders' pockets.

Over the last 12 months, Intel generated $10.54 billion in free cash flow, translating to around $2.163 per share. This is well below Intel's current annual dividend payments of $1.04 per share, suggesting the company has plenty of room to grow the amount it pays out in dividends even if its business stays stagnant.

It wouldn't be smart for Intel to just jack up its dividend payout to the maximum its trailing-12-month free cash flow could support. Such a move would limit Intel's ability to deliver future increases, especially if it continues to have a tough time growing its top and bottom lines going forward.

It's smarter to leave a hefty amount of margin on the table, "just in case."

With that in mind, I expect Intel to deliver a modest dividend increase when it announces its financial results in January. A bump from $0.26 per share on a quarterly basis to, say, $0.28 per share would represent a solid raise (roughly 7.7%).

Such a dividend raise isn't going to dramatically change the fortunes of current Intel stockholders or be something that will get investors who just don't like the story to finally hop on board. Still, it would be a welcome move.

If Intel's business performance dramatically improves, so will the dividend

A company's dividend payments and its business performance are very closely tied together. If Intel were to see a substantial and sustainable boost in profitability (say, all of those big investments in R&D that the company is making today pay off in a nice way five years from now), then it could have a lot of room to improve the dividend more dramatically.

At the same time, though, if Intel could boost its dividend substantially because of much better business performance, then the stock price would also likely trade quite a lot higher than it does today. In that case, the dividend yield for new buyers of the stock might not be much higher than it is today, but for shareholders who got in earlier, the dividend yield relative to one's initial investment would go up a bunch.

By How Much Will Intel Corporation Raise Its Dividend in 2017? @themotleyfool #stocks $INTC Next Article
Current