Shares of Seadrill Ltd (NYSE:SDRL) have been crushed by the decline in oil prices over the past two and a half years, which has led explorers around the world to cut back on offshore investments. Some contracts have been cancelled or renegotiated, and the result has been a decline in cash flow so large that Seadrill was forced to suspend its dividend.

While the offshore drilling business struggles, there are still some stocks in energy that provide attractive dividends for investors with upside potential. And a good place to start is with Baker Hughes Incorporated (NYSE: BHI), Kinder Morgan Inc (NYSE:KMI), and ExxonMobil Corporation (NYSE:XOM).

When Baker Hughes decided to combine its business with General Electric's (NYSE:GE) oil & gas arm, it created an even bigger energy power ready to supply the industry. The business would touch everything from offshore to pipelines to shale drilling, and the consolidation should give more pricing power for the entire business.

Along with the GE transaction, Baker Hughes investors will get a $17.50 per share dividend, over a quarter of the share price today. That's on top of the current $0.68 per share from the current dividend, which will be reset once the combination takes place.

There's some uncertainty as to what Baker Hughes dividend will be long term, but with a $17.50 per share special dividend on the way if the deal gets approved and a stronger business after the combination with GE, I think this is a solid energy dividend today.

Kinder Morgan is one of the largest pipeline company in the U.S., generating revenue from moving oil and natural gas across the country. This gives the company a steady revenue base with less direct exposure to commodity prices in general. But Kinder Morgan is dependent on high volume going through pipes, so commodities do play an indirect role in the business. 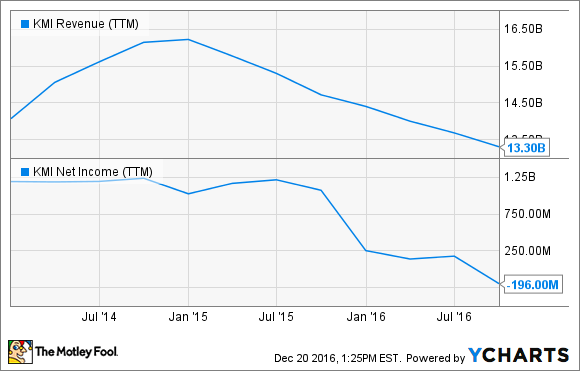 What's encouraging right now is that U.S. oil and natural gas consumption are on the rise, which means more energy flowing through pipelines. And OPEC's recent agreement to cut 1.8 million barrels of oil production (if the deal holds) will likely result in rising oil prices and increase energy drilling in the U.S. Both are positives for Kinder Morgan.

Kinder Morgan is also highly leveraged to growth in natural gas drilling in the U.S., which has been driven by shale drilling across the country. Cheap and abundant natural gas has led to more natural gas power plants and also liquified natural gas exports that are starting to come online. If natural gas production continues to grow it'll be a big tailwind for the business.

The recent dividend adjustment to $0.50 per share on an annualized basis still gives the stock a 2.4% dividend yield. While that may not be the highest dividend in the energy industry, I think the tailwind will be behind Kinder Morgan for years to come.

My final dividend pick in energy is ExxonMobil, the oil giant with a presence in everything from drilling to gas stations. Wherever there's money to be made in energy, ExxonMobil is there.

What ExxonMobil has working to its advantage is the increase in global oil consumption, which will lead to increased volumes and, likely, higher prices. And you can see below that higher oil prices are still a good thing for the company, despite its diverse business model. 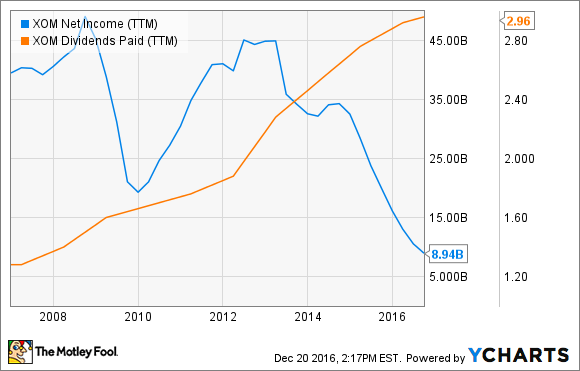 You can also see that despite volatility in profits, ExxonMobil has been able to raise its dividend consistently over the past year. The yield right now is 3.3%, which is high for a company that has a lot of upside in cash flows if oil prices increase.

If you're looking for a steady dividend in energy, ExxonMobil is a great pick, and it will be much more reliable than Seadrill's volatile business.