A building boom is supposed to be taking place in Las Vegas, but it's off to a slow start.

In March 2013, Genting Group bought an 87-acre plot of land on the north end of the Las Vegas Strip for $350 million, promising to build a new resort there by sometime in 2016. A little over a year later, Australian billionaire James Packer bought a controlling interest in a 35 acre plat just south of Genting, planning to begin construction on a new resort in 2015. Together, the projects would inject new life in Las Vegas and bring more high-end hotels to the north end of the Strip.

Today, Genting's site has a parking garage and an HR facility, according to Genting Americas, but little else. At best, construction will begin in full early next year. The Packer site, which is now called Alon resort, is now at a standstill after Crown Resorts and James Packer backed out. A boom in mega resorts construction is supposed to be in full swing, but maybe the construction boom in Las Vegas won't take place after all.

When a developer commits to building a multibillion-dollar resort, they're taking a bet that the market they're building in will be ready to embrace them three or four years down the road. In Las Vegas, there may not be a lot of confidence that the region will be able to handle more resorts in a few years without eating into everyone's results. And there's good reason to think that.

Below is a chart of the Las Vegas Strip's gaming revenue since 2006, and you can see that gaming revenue has been flat-ish for about a decade. But in 2013, when plans for expansion began, it looked like Las Vegas may be growing again. 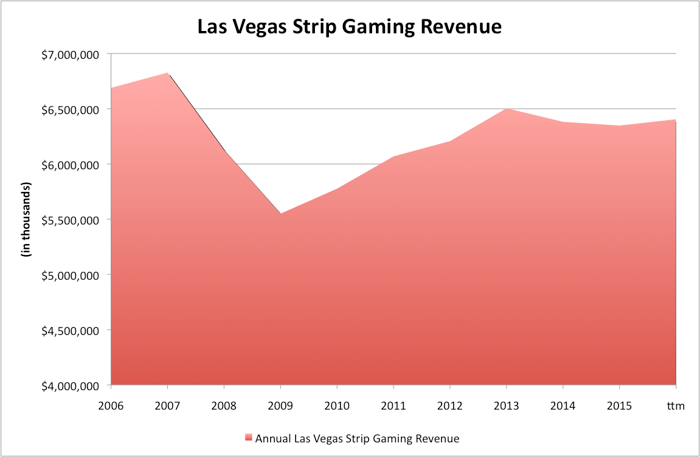 Data source: Nevada Gaming Control Board. Chart by the author.

The growth failed to materialize over the last three years, and that may cause even the most aggressive developer to pull back from building another resort.

The fact that Genting is building slowly and the Alon project is stalling is an incremental positive for MGM Resorts (MGM -2.09%) and Caesars Entertainment (CZR), who have a lot of properties on the Las Vegas Strip and would likely lose business if more of the north end were developed. Wynn Resorts (WYNN -0.58%) and Las Vegas Sands (LVS -2.37%) will have a more mixed impact because more properties near their resorts may draw more customers, even if they competed for a lot of customers.

Overall, though, it's a positive for incumbents that new resorts aren't opening as quickly as planned, but the reason they're not being built (slow growth) isn't so bullish.

Las Vegas may need some revitalization

It's been six years since a new resort opened on the Las Vegas Strip, and that's an eternity in a city that's used to opening new mega-resorts on a regular basis. Maybe it's good news that new competitors aren't coming to town, or maybe the city needs some new blood to revitalize the region. Whatever you think of the impact new casinos can have, it looks like it'll be at least two, if not three, years before another resort opens on the Las Vegas Strip. A boom in construction that seemed imminent a few years ago has come to a grinding halt.

Travis Hoium owns shares of Wynn Resorts. The Motley Fool is short Caesars Entertainment. Try any of our Foolish newsletter services free for 30 days. We Fools may not all hold the same opinions, but we all believe that considering a diverse range of insights makes us better investors. The Motley Fool has a disclosure policy.