So much for the micro-location retail revolution. 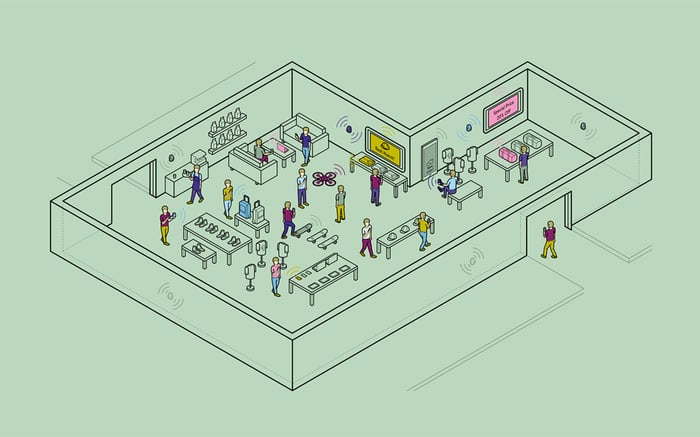 In 2013, Apple (AAPL 3.08%) unveiled a technology that had the potential to revolutionize brick-and-mortar retail: iBeacon. The protocol was built on Bluetooth Low Energy (BLE) and promised to enable micro-location tracking in a way that offered far more accuracy than traditional GPS or the assisted GPS in modern smartphones. We're talking about being able to tell what specific aisle a customer is perusing, and being able to market to that customer accordingly.

At the time, Apple was rumored to be working on mobile payments -- what we now know as Apple Pay -- and the idea of micro-locations combined with mobile payments was like a futuristic dream for retailers. Imagine offering a targeted coupon or discount to a customer based on micro-location and then prompting them to pay on the spot with a smartphone. Third-party companies like Estimote even sprouted up to make and sell beacons using iBeacon.

Following a pilot program, Macy's said in 2014 that it would roll out beacon technology nationwide. Major League Baseball uses beacons to make ballparks more interactive in numerous ways. Even a few local grocery stores tried deploying them for the same retail reasons. So, what happened?

Apple never really cared all that much

For starters, Apple hasn't really done much over the years to promote the protocol in a meaningful way. In fact, it never really did. iBeacon was little more than a footnote during WWDC 2013, and wasn't even mentioned during WWDC 2014.

The lack of meaningful support or promotion from Apple certainly didn't help, which may be attributable to the company shifting its developmental focus on near-field communication (NFC), which Apple Pay is built on. NFC and iBeacons aren't necessarily mutually exclusive, but like most technologies, supporting numerous protocols adds to costs for those interested in commercial deployments. Apple has seemingly ceased ongoing development and support as well. For instance, in its iBeacon for Developers page, the Getting Started (link opens PDF) guide is from 2014.

It's also not as if Apple ever made any iBeacons directly, although all iOS devices are capable of becoming an iBeacon transmitters; it just detailed and released the protocol, leaving the fate of the technology in the hands of third parties.

This lack of ongoing support and development also means that some of the initial challenges largely went unaddressed.

In order to use iBeacons, users need to 1. download a retailer's app, 2. allow the app's notifications to be enabled, 3. make sure Bluetooth is turned on, and 4. enable location services for that app as well. After that, the interaction should add value to the customer's experience in some way. Most iBeacon deployments failed in some or all of these areas. Many users turn off one or more of those functionalities in order to improve battery life, for example.

iBeacons also never integrated with the plethora of enterprise IT systems that companies use for point-of-sale (POS), inventory tracking, loyalty programs, marketing campaigns, or other types of analytics. That either severely limits the value from the perspective of a retailer or significantly adds to the costs of deployment if the retailer needs to build a system from scratch.

Cybersecurity is only getting more complex, and iBeacons had weak security and privacy controls in place.

It's entirely possible that these weaknesses could have been overcome, but that's up to Apple. It's also not as if there's much competition in micro-location technologies that would spur Apple into action. Alphabet's Google released Eddystone in 2015, its own BLE-based beacon protocol, but like with Apple, it's pretty low on the priority list. You'd think that Google would take it more seriously, since beacons are primarily positioned as supplementary marketing tools. Last I checked, Google's business is still built on advertising. Mobile chip giant Qualcomm released its own Gimbal platform shortly after Apple in 2013, but has since spun it off into a separate company.

Beacon technologies aren't quite dead, though. Target deployed a pilot program just last year in 50 locations. But unless the major platform operators really get behind the technology, all pilot programs will likely suffer the same unfortunate fate.