The past few years have been rough for Williams Companies' (NYSE:WMB) investors. Thanks to tumbling commodity prices and two botched mergers, the company's stock plunged, though it has started to recover in recent months: 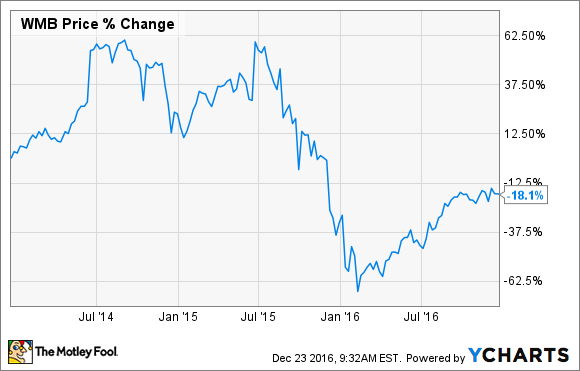 While the stock is still well off its peak, that does not mean its best days are behind it. In fact, three catalysts on the horizon could take it to new heights in the years ahead.

Pipeline companies are experiencing increasing difficulty in building new projects in North America. Williams, for example, hit roadblocks on two key pipeline projects this year, which is hampering its ability to grow. In April, the state of New York denied Williams and its partners, including Cabot Oil & Gas (NYSE:COG), the necessary permit to build the Constitution Pipeline, which is a $925 million, 124-mile pipeline that would transport gas from Pennsylvania to New England. Initially proposed in 2012 and expected to be in service by 2015, the project's fate is in the hands of the court system. Meanwhile, in October, the Federal Energy Regulatory Commission pushed back the approval of the company's Atlantic Sunrise Pipeline in Pennsylvania. The $3 billion, 200-mile pipeline was expected to go into service by the end of next year. However, Williams and top shipper Cabot Oil & Gas might have to wait until the middle of 2018 for that project to go into service.

Williams is far from the only pipeline company to have trouble building new pipelines. Former merger partner Energy Transfer Equity's (NYSE:ET) MLP, for example, is currently unable to complete a key pipeline because of intense opposition. That's a huge blow to the company, which had finished more than 85% of the $3.8 billion project before hitting a major roadblock.

That said, it could become much easier for pipeline companies to complete projects once Donald Trump takes office. Trump ran on an America-first policy platform, which included plans to peel back unnecessary regulations that hampered American businesses, particularly within the energy sector. Further, Trump wants to see the country use more natural gas as the nation steps toward energy independence while also reducing our carbon footprint. This policy shift suggests that the country will need more natural gas pipelines, which should increase Williams' investment opportunities.

No. 2: Earnings volatility should be a thing of the past

Another of William's problems in the past has been its direct exposure to volatile commodity prices, which caused its cash flow to fluctuate. To combat this problem, the company spent the past few years switching customers to fee-based contracts and selling assets exposed to commodity prices while at the same time investing billions in building new fee-based assets. This strategy has reduced its exposure to NLG margins from 30% five years ago to 7% this year, which Williams hopes to get below 3% shortly.

By reducing its direct exposure to commodity prices, Williams should generate very stable cash flow, which will hopefully lessen the volatility in its stock price. Further, as the company builds or buys new fee-based assets, its cash flow should steadily increase, which could take its stock price with it.

No. 3: Dividend growth is just over the horizon

When Williams' merger with Energy Transfer Equity fell apart earlier this year, the company needed to develop a new strategy. One of the first things it did was slash the dividend 68.8%, which freed up cash flow to support its growing MLP. It is using a unique strategy, reinvesting a portion of the distributions it receives from its MLP back into that entity via a distribution reinvestment program (DRIP). As a result, it is increasing its stake in the MLP, which will provide dual cash flow growth engines in the future. Not only will Williams' cash flow rise as it acquires additional units, but it should eventually collect larger distributions on those units when its MLP restarts distribution growth.

Initially, Williams expected its MLP to be in the position to restart distribution growth in 2018, which coincided with the completion of Atlantic Sunrise. While that delay could push back the timeline of the first increase, Williams still sees higher payouts in its future. Once that happens, it should draw income investors back to the stock, likely sending the price upward.

Williams has been through a lot over the past several years, especially with all of the drama relating to the ill-fated Energy Transfer Equity merger. However, the issues that plagued it in the past should start fading away. Not only should the new president make it easier to build natural gas pipelines but Williams' self-help efforts could start bearing fruit over the next year. These catalysts all suggest better days lie ahead for Williams' investors.