With 2016 coming to a close, the time has come for investors to look ahead to 2017 for potential opportunities. One smart investing strategy is to buy stocks that pay out a modest dividend and offer up strong growth prospects in the years ahead. If that sounds like an appealing tactic to you, then I'd recommend giving FactSet Research Systems (NYSE:FDS), Starbucks (NASDAQ:SBUX), and MarketAxess (NASDAQ:MKTX)a hard look. Here's why.

The company behind Wall Street's edge

Information travels around the world in milliseconds these days. That makes it imperative for investors on Wall Street to have access to up-to-date information in order to remain competitive. And that high demand for greatly benefits companies like FactSet Research Systems.

FactSet currently counts thousands of banks, hedge funds, mutual funds, and other financial institutions among its customers, and dozens more are signing on each year. That's wonderful news for investors as access to the company's data quickly becomes a mission-critical part of its customers' businesses. That provides FactSet with a lucrative business model that enjoys pricing power and recurring revenue.

Between annual price increases, share buybacks, and international expansion, FactSet offers investors a shot at EPS growth of nearly 10% annually over the next five years. Better still, FactSet pays out a 1.2% dividend yield that only consumes about 23% of earnings, giving the company ample room to raise its payouts in the years ahead.

The king of coffee

With more than 25,000 Starbucks stores currently operating around the world, you'd be forgiven for assuming that this company's days of significant growth are over. However, Starbuck's management team recently forecast that its annual EPS growth would land between 15% to 20% over the next few years. Those figures suggest that this company is still firmly in expansion mode.

So how is this massive company going to put up those huge numbers? Starbucks' growth plan hinges growth in a handful of key areas.

For one, the company's expansion into the consumer packaged goods space provides ample opportunities. This segment only represents a small amount of its overall revenue, but Starbucks sees huge upsides in the packaged coffee and ready-to-drink coffee markets. 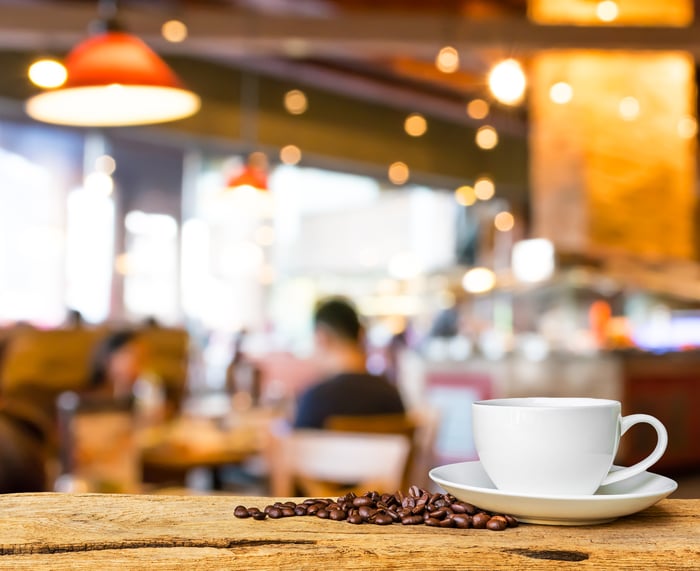 In addition, Starbucks still sees plenty of room left for store expansion both domestically and abroad. Stateside, Starbucks has plans to open another 3,400 stores, while emerging markets like China still have vast untapped opportunities.

Finally, Starbucks is also moving upscale. The company is making a big push into the super-premium coffee market through its upscale Reserve stores, which will serve coffee costing as much as $10 a cup, providing room for revenue and margin expansion.

Starbucks' EPS growth targets are achievable, and with a dividend yield of 1.7%, this is a company that growth and income investors alike can learn to love.

A new platform for bond investors

Billions of dollars' worth of fixed-income securities are bought and sold each day, but most of these transactions take place through one-on-one exchanges over the phone or email. It's an archaic system that hasn't changed much over the last few decades, and that's where MarketAxess comes in.

MarketAxess was created by a handful of broker-dealers more than a decade ago as a way to bring the bond market into the 21st century. The company created an electronic trading platform that provides its clients far more transparency, liquidity, and data on the fixed-income markets than they ever had before.

As a first mover in the space, MarketAxess now boasts a leading share of the market, making its platform the go-to place for financial institutions. As the company's client base grows, so does its attractiveness to new customers, providing the company with a nearly unbeatable competitive advantage.

While MarketAxess has been steadily winning market share in bond trading for years, it is still a long way from saturating the market. That's why analysts are projecting that the company's EPS will grow by more than 17% annually for the next five years.

MarketAxess only recently decided to turn on its dividend spigot, so the company's yield is a fairly low 0.6% right now. However, its payout ratio is less than a third of earnings, and those earnings are set to grow quickly. That makes MarketAxess a great stock for growth-focused investors who like a side of income to consider buying today.