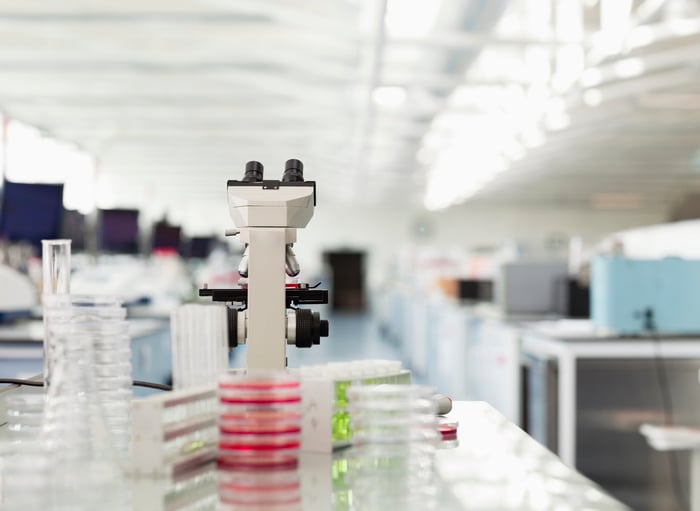 Investors have taken a wild ride with AMAG Pharmaceuticals (NASDAQ:AMAG) in the last two years. A series of acquisitions that began in 2014 propelled the stock to all-time highs two summers ago, reaching levels over twice the current share price.

The enthusiasm may have died down, but the $1.2 billion market cap biopharma is closing the year with strong momentum. While profits have been hit by larger investments in marketing, sales, and research and development, revenue and cash continue to grow. That may have investors wondering, "Where will AMAG Pharmaceuticals be one year from now?" Let's take a look at the forces driving current progress and future potential.

The company's lead product, Makena, was acquired in late 2014. The drug reduces the risk of preterm birth in certain populations of pregnant women and has pushed AMAG Pharmaceuticals' revenue to the next level. In 2014, total revenue hit just $124 million -- a level eclipsed in each of the last two quarters.

Two other products -- Feraheme (hematology) and MuGard (oncology) -- are expected to contribute at least $95 million in revenue for 2016. The former is the only product developed internally, while the latter was acquired in 2013.

And not be to overlooked is a subsidiary known as Cord Blood Registry, or CBR, which provides services allowing families to preserve newborn stem cells and umbilical cord blood stem cells and tissue samples. Mr. Market didn't react very favorably when the $700 million acquisition was announced in August 2015, but the acquisition will add at least $98 million to total revenue this year.

Add all of the misfit indications -- maternal health, hematology, and oncology -- together and AMAG Pharmaceuticals expects total revenue of at least $523 million in 2016, compared to just $418.3 million last year.

That figure should grow even greater in the year ahead, especially considering that quarterly revenue has grown in each of the last five periods. The case for growth is supported by a steady increase in Makena sales reps in 2016 and the launch of a new single-dose vial that is preservative-free (an important consideration for expectant mothers). Management believes the drug, which is the only FDA-approved treatment to reduce the risk of preterm birth, has a $1 billion market opportunity.

Meanwhile, AMAG Pharmaceuticals expects CBR to grow its recurring revenue base, defined as sample storage fees, at a compounded annual growth rate of 8% through 2020. Considering only 5% of births in the United States are accompanied by any type of tissue sample storage, the company's efforts to increase awareness and grow the market could provide a steady stream of high-margin, long-term growth.

Developments to watch in 2017

Investors should expect Makena and CBR to drive the bulk of the company's growth in the year ahead, but there are several pipeline developments with the potential to impact the stock's long-term trajectory. Here's a rundown of events to look out for in 2017:

And of course, while investors shouldn't expect an acquisition to occur, management hasn't been shy about bringing out the elephant gun in the past to spur growth. The company's cash pile grew to $614 million at the end of September 2016, compared to $442 million in September 2015. That provides a lot of firepower to plug any holes that may be punched into the biopharma's plans by development or regulatory failures.

AMAG Pharmaceuticals has certainly been an interesting stock to watch in the last several years. After a year of growth in 2016, the year ahead promises to be eventful, with a healthy amount of trial results and regulatory decisions on tap. Much of the company's future hinges on developments with Makena, growth in CBR, and results from late-stage trials of DIF (which may not be available in 2017). If all goes well, then the company could be trading even higher one year from now.

Where Will AMAG Pharmaceuticals Be 1 Year From Now? @themotleyfool #stocks $AMAG Next Article
Current