Fitbit (NYSE:FIT) sells more fitness trackers than their two biggest competitors combined. The consumer technology space is a challenging one with prices dropping year over year as technology improves. But what you might not know is that Fitbit has increased revenue per device sold in each of the last four years. In fact, this number has grown 69% from 2012 to the current 2016 average, as shown in the chart below. 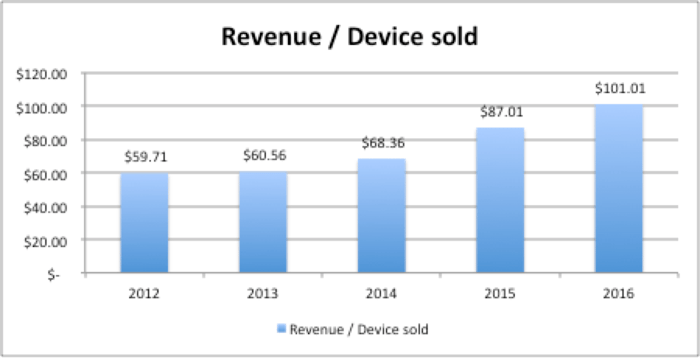 Fitbit's ability to increase the revenue per device sold is important as competitors release lower-cost and lower-margin devices in an attempt to win market share from Fitbit. Often, consumer goods companies are stuck in a race to the bottom, competing on price. Consumer goods such as televisions, computers, and household appliances have all become commoditized with increased competition. It's a rare company that is able to maintain pricing power over the long run. Often they are innovative companies, that have great brands, and powerful network effects -- or a combination of those factors.

Can Fitbit be one of those rare companies? Revenue per device sold is the one number for Fitbit investors to watch. This number gives you insight into whether Fitbit's innovative product line, including accessories and other non-device revenue streams, is winning with customers.

This expansive product line has been the key contributor to revenue increases per device. The current product lineup is shown above. The table below shows the release dates of each of the Fitbit devices and the prices at introduction. In fact, six of the last seven new products were $129 or more.

Image source: Author chart based on Fitbit's press releases. *Force was recalled and replaced by the Charge five months later.

Fitbit doesn't release sales by device, but it did have a press release when the company shipped more than one million Blaze units in the first month it was available. The success of the Blaze contributed to Fitbit's 2016 revenue per device sold being over $100 for the first time ever. CFO William Zerella stated in the most recent conference call that Fitbit's "Q3 product mix benefited from the contribution of Blaze's $199 price point versus a year ago."

Removable trackers are an opportunity to increase revenue per device

Fitbit's revenue is also helped by the fact that all of its new products released this year have trackers that can be removed from their bands. This allows users to personalize their trackers with different color bands, different band materials, or even wear their tracker in a stylish necklace. Fitbit accessories range in price from $4.95 to $195. The ability to personalize your Fitbit to your liking is key to customers using the Fitbit product after the purchase.

"One of the first things we learned in this industry is that fitness is personal -- and if something isn't your style, you won't wear it," said James Park, CEO and Co-Founder of Fitbit.

Fitbit has partnered with well-known design houses such as Public School and Vera Wang to provide fashionable alternatives to the standard fitness bands. Starting next year, Tory Burch will be added to the lineup. This accessory revenue for Fitbit could be an important driver to increase its revenue per device going into 2017.

While product mix and accessories are the biggest drivers for increased revenue per device, Fitbit has a few more tricks up its sleeve, including software, corporate wellness programs, and its newly announced digital health initiative.

Corporate wellness programs reportedly contributed less than 10% of revenue for the sale of devices at the end of 2015, but no updates on corporate wellness programs have been given throughout 2016. As far as the digital health initiatives go, these are too new to even talk about in the earnings call. When Fitbit's CEO and Founder James Park was asked about digital health initiatives, he indicated, "we're going to reserve comments there until the next call ... while we might start to see some revenue streams there, they're going to be small initially."

Fitbit has made significant progress in expanding its product line to higher-cost devices like the Fitbit Blaze, Charge 2, and Surge to capture more revenue per device sold. Fitbit is also putting a tremendous effort into the accessory business to allow users to customize their Fitbits to their personal style. These efforts have allowed Fitbit to stay out of the race to the bottom, as often happens with consumer goods devices.

While these efforts have been successful so far, Fitbit will need to continue to focus on innovation to keep its revenue per device sold from backsliding, and they are. In the most recent quarterly report, Fitbit's research and development (R&D) spend was a solid 14% of revenue, and its R&D staff makes up 60% of the employees at Fitbit. These efforts should continue to pay off. In the most recent earnings call, CEO James Park remarked how its research and development efforts impacted revenue:

This investment in research and development is resonating with consumers. Our new product offerings-Blaze, Alta, Charge 2 and Flex 2-represented 79% of revenue in the quarter.

Fitbit's investments in innovation are defending its average revenue per device, but Fitbit will need to make its other revenue opportunities a bigger part of its overall revenue -- contributing more than 1% -- in order to become a valuable long-term investment.