Staying relevant through constant innovation and disruption is more important in the tech industry than in arguably any other sector. By investing heavily in research and development (R&D), these companies are making expensive bets on the future and what technology and trends will lead it -- along with their own sales and profits. 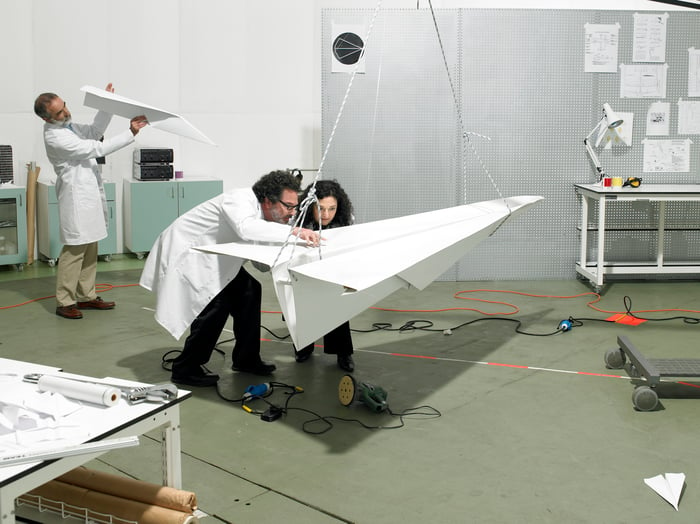 To compile this list, we looked at the total dollar amount that publicly traded tech companies have each spent on R&D over the past year. There are many companies investing heavily in R&D, both by real dollar amount and also relative to their own market cap., but here are the six companies that stood out as shaping the future based on how much they have invested, and will probably continue to do so, to be the ones at the forefront of future development.

What those billions are going after

It's not surprising that Alphabet (NASDAQ:GOOG)(NASDAQ:GOOGL) tops the list as the biggest investor in the in the world in terms of R&D spend. Alphabet's willingness to spend heavily on research into areas such as self-driving cars, artificial intelligence, and wearable technology such as Google Glass and connected clothing shows how the company is working to assure it has a place in the world far beyond the internet search that currently makes up the vast majority of its revenue. Alphabet's recent restructuring to make Google one segment of the overall company was specifically designed to allow the company to continue making audacious moonshot bets.

Microsoft (NASDAQ:MSFT) recently announced that it will release a device to compete in the smart-home space. Powered by its Cortana voice-enabled artificial intelligence platform, this device will compete directly with similar products such as Google Home. Other big investments in the past few years from Microsoft include cloud computing and more work on its Windows operating system for mobile devices and as an "Internet of Things" platform. It's yet to be seen how Microsoft's recent acquisition of LinkedIn will fully play out, but you can expect that it links up with some of the areas Microsoft has been investing heavily in already.

Intel, Oracle, and Cisco Systems are each working hard to keep their industry-dominating positions from younger and more fast-paced companies within the microprocessor, graphic chip, and computing network space. These three behemoth companies have been building and developing infrastructure for cloud computing, internet security, and other digital-age network services that require new technology far beyond what their own technology could handle in years past. Building and preparing for these big growth trends in such a fast-moving segment of the IT industry will like drive higher R&D spending in these companies for years to come.

Finally, there's Apple (NASDAQ:AAPL). This company has been the focus of much analysis in the past few years for not releasing enough new and astonishing tech, so much so that many of those analysts have questioned if Apple's growth days are behind it. However, the company is one of the biggest investors in R&D, seemingly going after the connected-car market, artificial intelligence, or other long-term investments such as building much more comprehensive software platforms. What makes Apple especially interesting is that it's by far the wealthiest company on the list by total cash value, which was a record of nearly $238 billion in cash, cash equivalents, and marketable securities in its most recent quarter. That's more than double the cash of second-place Microsoft, with $117 billion.

Preparing for bigger spending to come

If those numbers don't already look massive enough, they could get bigger in the coming years. Apple's $238 billion in cash? The vast majority of that amount is stored offshore, where Apple is holding it because the company doesn't want to pay the around 35% corporate tax to repatriate it back to the United States.

As part of a tax system overhaul, President-elect Donald Trump has said he seeks to lower this corporate tax rate and could even provide a special 10% tax for companies that are seeking to repatriate a huge chunk of cash back to the States. The richest companies in the U.S., then, including many of the companies in the preceding list, would probably then repatriate much of that cash and could put the money to work in increased R&D spending.

Like much of the potential changes coming to corporate tax or other policy, there's no telling when this might happen, what the final numbers will be, how much each of that overseas cash each company would bring back, or what the companies will do with the money. Still, either way, these companies and many like them are likely to continue spending heavily on researching and developing the next wave of new technology that will drive their industries in the years ahead -- something that long-term investors won't want to miss.