Stocks that have been beaten down by pessimistic investors always have the potential to soar if things start to go right. They also have the potential to tumble further, punishing investors for betting on a turnaround that never surfaces. Fitbit (NYSE:FIT), J.C. Penney (OTC:JCPN.Q), and GNC Holdings (NYSE:GNC) are three stocks that have been left for dead by investors. They're risky for different reasons, but all three stocks could easily double in 2017. Grinding to a halt

Fitbit sells a lot of wearable devices. Through the first nine months of 2016, the company moved 15.8 million units, generating $1.6 billion of revenue. Total revenue for the year should top $2.3 billion. Unfortunately for those who thought early on that Fitbit would be the next great device company, the stock has been hammered since the company went public in 2015. The stock is down 85% from its peak, with a current market capitalization of just $1.7 billion. 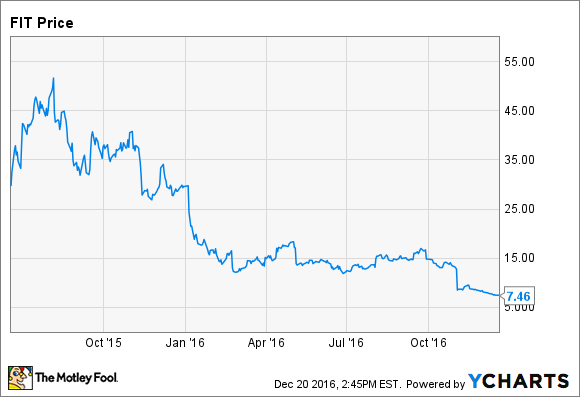 The problem is growth. Fitbit dramatically ramped up spending over the past year, hiring scores of employees in its research and development department and spending heavily on sales and marketing. The goal was to drive new products to market quickly, staying one step ahead of the competition. This spending, while knocking down profits, hasn't produced the growth that the company was after. Fitbit expects its fourth-quarter sales to grow by just 2% to 5% year over year, a dismal outlook that disappointed investors.

With shares of Fitbit so beaten down, any good news could send the stock soaring. If Fitbit reports a better holiday quarter than expected and guides for modest growth in 2017, that could be enough to make investors happy. The flip side: If Fitbit guides for a sales decline in 2017, or comes up short of its lackluster guidance for the fourth quarter, the stock could tank even further. Fitbit needs to constantly come up with innovative products to drive growth, and that makes the stock risky. But investors willing to bet that the company is in better shape than it appears could be rewarded handsomely in 2017.

Department store J.C. Penney nearly collapsed a few years ago when sales fell off a cliff following dramatic changes by former CEO Ron Johnson. The company has been stabilized, but its turnaround remains precarious. J.C. Penney is still posting losses, and its sales are billions of dollars below pre-crisis levels. What's worse, comparable sales declined by 0.8% during the third quarter, a result that should be viewed as a disaster for those betting on the company's turnaround.

J.C. Penney is doing a few things in an effort to boost sales. It's expanding the number of locations that contain a Sephora shop, offering same-day pickup for online orders, and ramping up its new appliance business. J.C. Penney returned to the appliance market this year after a 33-year absence, hoping that the category will drive comparable sales higher. 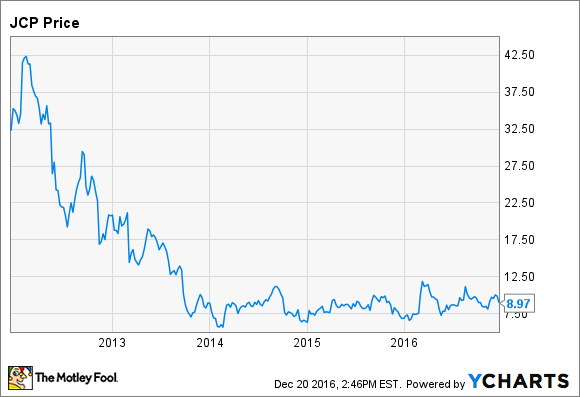 J.C. Penney has a market capitalization of just $2.8 billion, despite generating around $12.6 billion of revenue last year. The company expects to produce positive adjusted earnings this year, but reaching the point where it's producing enough profits to justify a higher valuation may be years away. Still, if J.C. Penney can drive customers to its stores this holiday season and put up better-than-expected numbers, investors could drive up the stock price in 2017 in anticipation of a brighter future.

Shares of GNC, a retailer that sells vitamins, supplements, and other health products, currently trade for just five times earnings. The company is suffering from a fairly dramatic sales decline that shows no signs of slowing down. Comparable store sales slumped 8.5% at company-owned stores during the third quarter, with a steeper 18.7% decline in international sales. Profits tumbled as well, with net income falling 29% year over year. 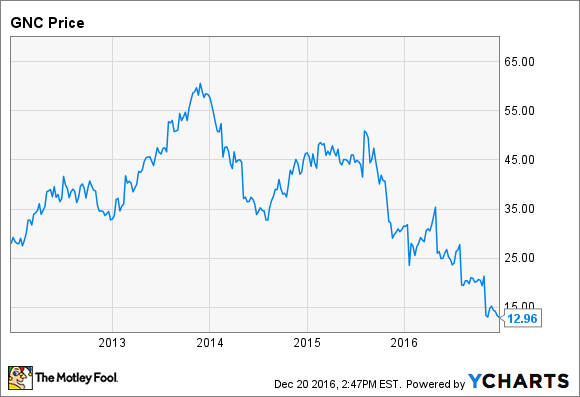 GNC's plan to turn itself around, called "One New GNC," was announced on Dec. 15. The company will stop selling products for different prices online and in-store, simplifying its pricing structure. A new rewards program, My GNC Rewards, will aim to produce repeat customers, and a new GNC mobile app will make buying products online easier. New brands and products will be introduced over the next year, and GNC is making supply chain changes that should help keep popular items in stock.

"The New GNC leaves the old, broken model behind," said Interim CEO Robert F. Moran. "We're confident it will have a positive impact on the business, but it will take time for the changes to take hold and translate to improved financial results."

GNC will likely continue to struggle as these new initiatives are implemented, but any sales improvement could send the stock through the roof. GNC is trading at an extremely pessimistic valuation, with the market assuming that earnings are going to collapse. That's certainly a possibility, but anything short of that outcome could produce a doubled stock price next year.

These Stocks Could Double in 2017 @themotleyfool #stocks $JCPN.Q $GNC $FIT Next Article
Current