It's easy for investors to become completely consumed by a company's financials, and that's obviously an important aspect of investing. But wise investors also pay a lot of attention to the products their companies make, because a product mistake or failure could send a promising company's stock crashing to the ground.

That's why reading through Consumer Reports' Annual Owner Satisfaction Survey can be really important for auto investors: It tells us how CR subscribers feel about the cars they bought. I'd much rather own a financially healthy stock that produces vehicles consumers would buy again, than not.

CR's rankings emphasize owner sentiment across a brand's entire portfolio of vehicles and model satisfaction is determined by the percentage of subscribers that would "definitely" buy the vehicle again. Also, in order to qualify, a brand must have at least two models with data and the survey focused on 2014-2017 model years. Without further ado, here are the results and some takeaways. 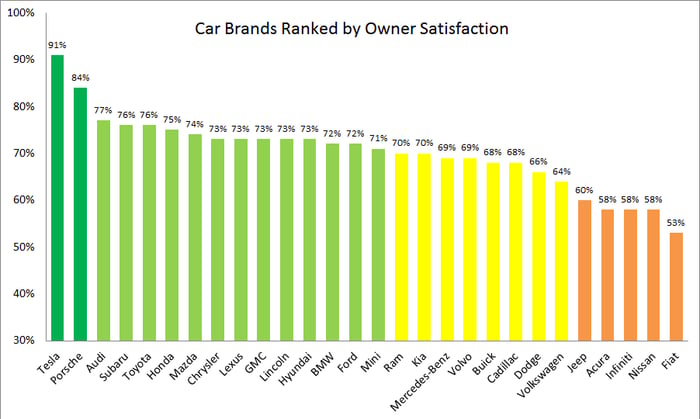 The Model X's wing doors caused consumer frustration, and occasional issues of doors not aligning properly aren't typical complaints for a car that can cost well into the $100,000 range. The fact that so many Tesla consumers would purchase again despite the production complaints is a huge win, and that's amplified by the fact that it's more affordable Model 3 will be launching at the end of 2017.

Ford Motor Company's (NYSE:F) luxury Lincoln brand made an impressive jump for the second-largest Detroit automaker. Lincoln jumped from its 21st ranking in the prior CR survey, up to 12th this year. That moved Lincoln ahead of some notable luxury brands such as Cadillac, Mercedes-Benz, and BMW. Remember, Lincoln was the only brand that Ford didn't sell off amid its business crisis in 2006, and the following financial crisis. It's poured much capital into reviving the luxury brand and it's now on pace for its third consecutive year of sales gains, something it hasn't accomplished in at least 16 years.

This is a great sign for Ford investors as luxury sales are high margin business, and increasing luxury sales at a time when new-vehicle sales are peaking would be very beneficial for the automaker. If more consumers are happy with the product, and would purchase again as this survey indicates, this suggests Lincoln's newest products are improved and that should enable the brand's rebound to continue.

Ultimately, these types of surveys are more important to investors than many realize. The automotive business is insanely competitive, and it's very costly to "conquer" consumers, which is luring them from a competing brand to your own. If you have a high percentage of consumers remaining loyal to your brand, it's simply good business. These surveys can also give a glimpse of a company that might not be producing vehicles up to standards, and that could lead to sales troubles in the near-term. Take Fiat Chrysler Automobiles for example, which had four of its five brands place 17th or lower. Wise investors should use these surveys to their advantage, and consider them while making investing decisions.