The best-performing sports stock in 2016 was a surprise. Heading into the year, the stocks with the most momentum and seemingly best chance to outperform were Nike (NYSE:NKE) and Under Armour (NYSE:UAA)(NYSE:UA), but the best sport stock of the year ended up unquestionably being Adidas (OTC:ADDYY) while Nike and Under Armour are down for the year.

A tough year for Nike and Under Armour

Both Nike and Under Armour have had a rough 2016, with their stock prices falling substantially. Both have faced their own financial headwinds -- decreasing margins for Nike and slower-than-expected earnings growth for Under Armour -- which the market has punished them for. Year to date, Nike and Under Armour (A shares) stocks have fallen around 18% and 22%, respectively.

Part of the reason these stocks were punished is that they had become expensive over the last few years. As soon as their growth came into question in recent quarters, the stocks plummeted to more reasonable valuations. Adidas, on the other hand, has been rewarded in the last year, and was afforded a higher price-to-earnings ratio as investors see more growth ahead.

Adidas has been on fire this year. The German sportswear company's sales and operating profit have both made impressive gains, up 14.6% and 33.3%, respectively, in the first nine months of the year over the prior-year period, with revenue growth in each of its geographic segments. Though the stock has fallen slightly in recent weeks, it's still up more than 60% so far this year. 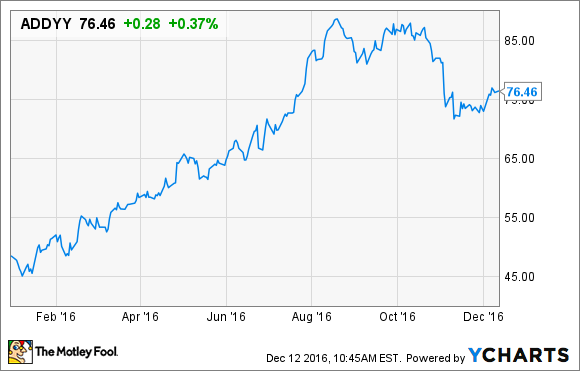 Much of Adidas' success is due to its growth in casual sportswear, such as its shoes, which are sponsored by non-athlete celebrities like rapper Kanye West. Additionally, longtime CEO Herbert Hainer has made a point of divesting from non-growth segments to focus more attention on those areas driving returns. For instance, the company's decision to exit its golf category and further invest in categories like running have helped the company grow earnings faster.

Hainer has retired, effective Oct. 1, and new CEO Kasper Rorsted is already getting Adidas investors excited about how he might continue the company's bull run. As the former CEO of consumer goods company Henkel, as well as holding leadership roles in U.S. companies like Compaq and Hewlett-Packard, Rorsted is set to help Adidas improve its retail and supply chain, while also helping the company continue regrowth in the important North American market.

Sports stocks in 2017 and beyond

Adidas dominated this space in 2016, handily winning between these three sports stocks. However, the next few years could be a different story. While Adidas' new CEO looks to be a great pick to help the company continue its growth, it will be competing against a much leaner and more aggressive Nike and Under Armour, two companies that have invested heavily throughout 2016 for more growth.

For Nike, improvements in inventory challenges and more focus on cost-cutting and smart investing could lead to future earnings gains. For Under Armour, continued expansion internationally and growth in footwear could help sales continue to outpace Adidas for years to come. Still, Adidas has had a great run in 2016 and has shown its ability to compete fiercely after many analysts viewed it as a laggard in this space. The ball is in Adidas' court now to keep that growth going, and to continue fighting off the increasingly competitive Nike and Under Armour on its heels.