Need some small-cap investment ideas to start off 2017? Take a look at Tailored Brands, Hi-Crush Partners, and Briggs & Stratton Corp.

If you are a big fan of T. Rowe Price or Peter Lynch-style investing, then small-cap stocks should be right up your alley. Small-cap stocks have something that few large companies can replicate: a long runway of growth. Of course, not all small-cap stocks pan out, so investors need to find those ones that have a distinct advantage that will fuel its future.

So we asked three of our contributors to highlight a small cap they see as a potential investment this month. They came up with specialty retailer Tailored Brands (TLRD), hydraulic fracturing sand producer Hi-Crush Partners (HCRS.Q), and outdoor power equipment manufacturer Briggs & Stratton Corp. (BGGS.Q). Here's a quick rundown of why each stock should be on your radar.

Tim Green (Tailored Brands): Tailored Brands, which owns Men's Wearhouse and Jos. A. Bank, has been a disaster of a stock since those two brands were merged. Since peaking in late 2015, shares are down about 60%, even after a post-election rally. 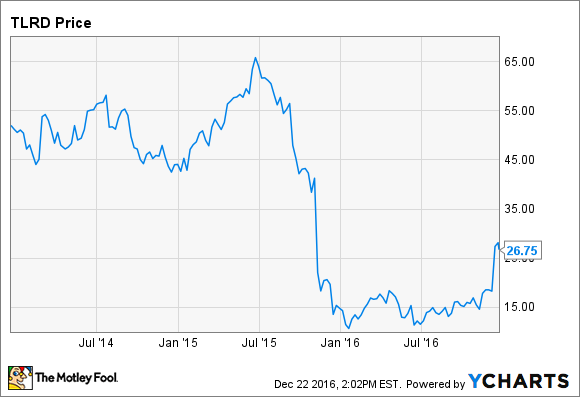 The problem has been Jos. A. Bank. Management decided to end that brand's practice of buy-one-get-three-free promotions for suits, leading to a collapse in sales. During the fourth quarter of fiscal 2015, comparable sales at Jos. A. Bank tumbled 31.7%. Things are now starting to get better, with Jos. A. Bank's comparable sales slumping by just 9.8% during the latest quarter. But the road to recovery will be long.

The good news is that the rest of the business is doing fine. Jos. A. Bank is beginning to lap its worst results, meaning that sales increases are likely in future quarters, and the company expects to produce between $1.70 and $1.85 in adjusted earnings per share this year. Earnings have the potential to rise significantly if Jos. A. Bank can be improved, making the stock's current price-to-earnings ratio of less than 15 based on this guidance look like an interesting opportunity.

Frack sand producers are OK after the crash

Tyler Crowe (Hi-Crush Partners): At the beginning of 2016, investing in frack sand suppliers seemed like an idea that would likely blow up in your face. Hi-Crush Partners looked especially troubled because it had an incredibly bloated balance sheet, its distribution payments to investors were long gone, and there was a real concern that it and some others in this business would go belly-up.

Fast-forward to day, though, and the market for frack sand is actually looking very strong in the coming years. One large trend that we're seeing in the oil patch is that oil producers have made several changes to the fracking process to make wells more economical: The lateral drilling length is getting longer, the amount of fracking stages per linear foot of well is increasing, and the amount of sand used per fracking stage is increasing. All of these things add up to huge gains in amount of sand used per well. The chart below from one of Hi-Crush's peers shows how much per well has increased in just a few years. What this means is that the amount of drilling going on in the U.S. doesn't need to get back to pre-oil crash levels for sand volumes to return to those same levels. In fact, a modest increase with oil prices will likely mean more sand demand across the board.

On top of improving fundamentals in the sand industry, it looks as though Hi-Crush Partners has fixed a lot of the issues with its balance sheet. The company's net debt currently stands at $169 million as it has paid down a decent chunk of debt this year. With a leaner financial structure in place and a big growth catalyst coming down the pipe in the form of sand demand, shares of Hi-Crush Partners are worth a look.

Todd Campbell (Briggs & Stratton Corp.): There's a good chance that the snow thrower or generator you use this winter will be powered by a Briggs and Stratton engine. However, the seasonal buying history of lawn and garden original equipment manufacturers is an even more important reason to buy shares now. 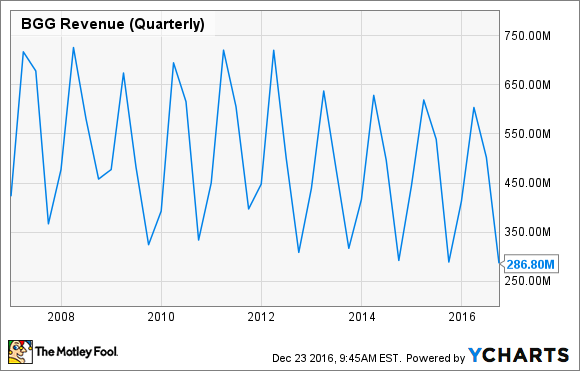 Since revenue and profit tend to increase in the first half of the year, it's probably not surprising that Briggs and Stratton's stock has historically been a top performer in Q1. Over the past decade, its share price has gained ground eight times in Q1, returning an average and median of 8.9% and 10.07%, respectively.

Obviously the past is no guarantee of future results, but Briggs & Stratton is arguably a very strong bet heading into the New Year.