Competitors like Arctic Cat are coming for Polaris in 2017. Image source: Arctic Cat.

Shares of Polaris Industries Inc. (NYSE:PII) have had a rough go of it over the last few years as operational missteps have led to recalls and a sharp decline in earnings. On top of that, demand for off-road vehicles and snowmobiles is down for the industry, creating a headwind Polaris is fighting. Looking ahead to 2017, there are still some challenges in sight. 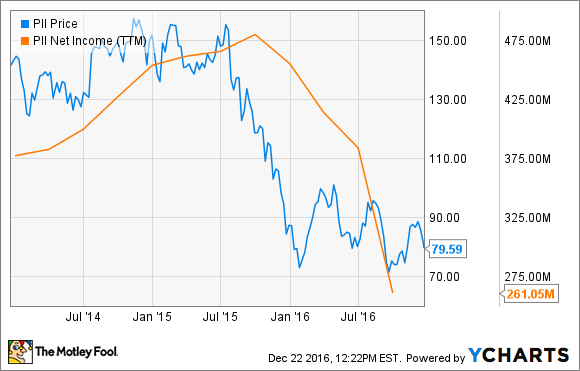 Recalls aren't over yet

In the third-quarter earnings report, management said the recalls of its RZR off-road vehicle were nearly halfway complete -- meaning there are at least a few more quarters of impact on the business from those recalls.

The long-term impact could be more to Polaris' reputation than anything else. Polaris was known as a very high-quality off-road vehicle manufacturer, so the recalls that hurt 2016 are going to be a ding on the company's reputation. At the very least, it will give customers a reason to try an Arctic Cat (NASDAQ:ACAT) or other competing off-road vehicle or snowmobile as their next purchase.

Industry dynamics seem to be working against Polaris right now, too. A boom in oil and gas drilling from 2010 to 2014 helped boost demand for its products, both for business and personal use. The decline in drilling has left companies with little need for new vehicles, and formerly high-paying jobs in energy are now hard to come by.

Agriculture demand, which makes up about 20% of the off-road vehicle market, has also been weaker lately. A surge in investment in new equipment after the recession helped sales for a few years, but commodity prices have been low the last year or two, and farmers and ranchers just aren't investing in new equipment anymore.

The backdrop has left Polaris with a shrinking market, which could continue into 2017. And let's not forget that it's been nearly eight years since the last recession ended, so historically another recession is likely to arrive in the next few years. The macro picture for off-road vehicles isn't looking very good.

Snowmobiles are only about 12% of Polaris' business, but it's a segment that could be dying slowly. A warm fall and winter so far in North America, where most Polaris snowmobiles are sold, means little demand for the vehicles, and before long, customers will be thinking about spring already.

The long-term weather trend is troubling as well. Winter has been getting warmer in key midwestern states, leading to less demand for snow products. This has led to serious trouble for Polaris competitor Arctic Cat, which has seen an overall decline in its more snow-focused business. At the very least, a segment of Polaris' business is going to be suffering from the same dynamic if winter continues to disappoint.

The final thing to watch in 2017 will be competition. The RZR recalls have given competitors an opening, and they're going to use it where they can.

Arctic Cat, for example, has improved its snowmobiles and introduced new all-terrain vehicles and side-by-sides for 2017. You can bet those will be compared to Polaris' and marketed as safer and more reliable (whether it's true or not) after Polaris' recalls.

Honda, Harley-Davidson, Yamaha, and others will do the same. And if Polaris doesn't complete outstanding recalls quickly to regain its reputation, it could be a successful sales pitch. At the end of the day, competition is what Polaris should be most worried about, because the macro factors like warmer winters and economic ups and downs are largely out of the control of anyone in the powersports industry.