The next two years are going to be a time of major transition for First Solar, Inc. (NASDAQ:FSLR). The company recently cancelled its Series 5 product upgrade, and will now go directly from Series 4 to Series 6. This should help lower costs and increase efficiency from each panel installed, but it'll be a long upgrade process.

Transitioning the business to a new product will be painful, and both 2017 and 2018 will see sharp declines in production. But First Solar has some qualities that will make surviving the transition easier, and that may make the stock a buy, despite challenges in the next few years. How bad will the next two years be? 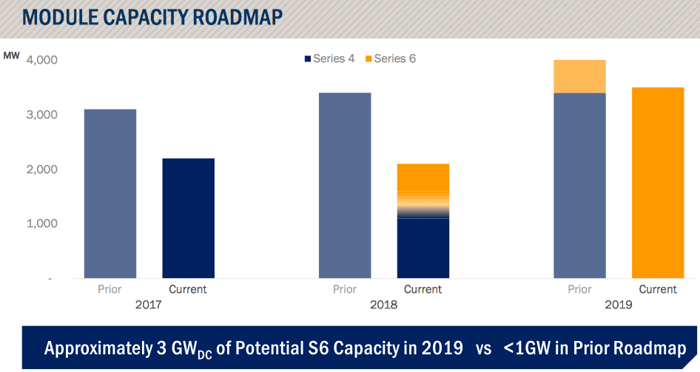 In 2019, capacity jumps back to at least 3.0 GW and the hope is that profitability will return as well. In the meantime, management is expecting $2.5 billion to $2.6 billion in revenue next year and earnings between a loss of $0.10 per share and a profit of $0.45 per share.

The fact that First Solar can remain near breakeven in a year when one-third of production will be offline is very impressive. And the company has a strong balance sheet to fall back on as well.

First Solar's operations may be declining to be near breakeven, but its balance sheet is a point of strength. At the end of the third quarter, First Solar had $2.09 billion of cash and marketable securities compared to just $787.2 million in debt. And management's guidance is to end 2017 with $1.4 billion to $1.6 billion of net cash. That's an increase of net cash guidance from $1.4 billion to $1.5 billion at the end of 2016 and nearly half of the company's $3.4 billion market cap right now.

The balance sheet alone won't ensure First Solar's survival or future success, but it creates a bridge to full production of the Series 6 module in 2019.

The reality is that First Solar is making equipment upgrades that should make the business competitive in 2019. But the solar industry changes so fast that it's nearly impossible to know what the industry will look like that far out.

Management has said they expect panel efficiency to be over 18% by the time Series 6 is up and running, but at the same time Chinese manufacturers will be ramping up mono-PERC technology, which will have efficiencies in the high teens. First Solar may just be keeping up by moving to Series 6 rather than creating differentiation.

The fact that First Solar has a great balance sheet and is expecting to be cash flow positive in a tumultuous year is a sign of strength for the company. That alone makes the stock worth considering in a solar industry where balance sheets are usually much weaker.

It's difficult to predict how much the company will earn when the Series 6 is in full production, but if we assume it can earn $0.10 per watt in profit (less than the $0.16 per watt profit in the past year) there's potential for $300 million in annual earnings. On top of the strong balance sheet, that leaves a lot of value in the stock.