Four months ago, I wrote about an incredibly cheap high-yield dividend stock: Enviva Partners (NYSE:EVA). The company -- based out of Bethesda, Maryland -- provides wood pellets for European and Asian power companies trying to wean themselves off coal. At the time, the stock offered an 8.7% yield and traded for just nine times a key metric (distributable cash flow, which we'll get to in a minute).

Since then, the stock has almost tripled the S&P 500's return, but as you'll see below, buying shares today likely yields you an even better deal. 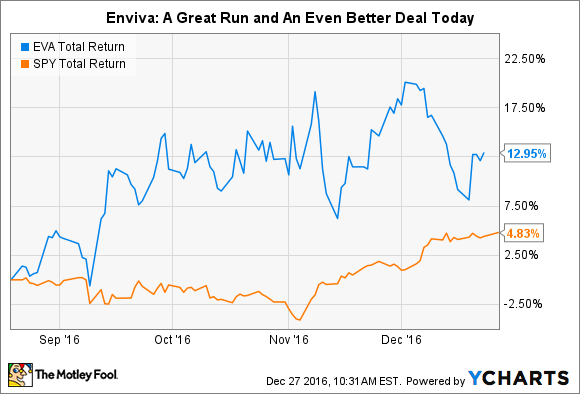 A stronger company than back in August

Since I first laid out the nuts and bolts of Enviva's business model -- which involves taking a very fragmented market for wood-pellet providers in the American Southeast and signing long-term contracts with power providers, primarily in Europe -- the company has only gotten stronger.

When earnings were announced in November, the company reported that while revenue had fallen, net income had increased an astounding 48%, while distributable cash flow (DCF) -- what the company can use to pay its outsize dividend -- grew 35%. While the shortfall in revenue was due largely to the timing of delivery of pellet products, the sheer increase in profitability speaks volumes about the company's leverage.

The company's December announcement that it had completed the purchase of a processing plant in Sampson, North Carolina, brings the number of plants on line to six. That, plus the wholly owned deepwater terminal in Port of Chesapeake, Virginia, gives the company scale that no one else is even close to matching in the United States.

With demand for biomass inputs expected to grow by 16% per year until 2020, you can see why the type of scale Enviva is building is so important.

You haven't missed the dividend boat...yet

And yet, by buying the company today, you're getting the same benefits you were just four months ago, when the company was trading for less.

That's because Enviva has already announced another dividend increase, and founder-CEO John Keppler has already indicated that the company plans to offer "at least" $2.35 in dividends per share in the next fiscal year. At today's prices, that equates to the very same 8.7% yield of four months ago. And thanks to the increase in DCF to a trailing figure of $73.2 million, the company still trades for just nine times that metric.

However, here's the real kicker for dividend investors: The company has stated many times that its ideal coverage ratio is 1.15. This basically means it has 115% of what is necessary to pay its dividend. In a more traditional sense, it means the company has a DCF payout ratio of 87% (1 divided by 1.15).

Over the past quarter, though, the coverage ratio was 1.57, and on a trailing basis, the coverage ratio has hovered at near 1.4. If management thought there was no better use for capital, it could increase its payout 22% tomorrow and still likely meet its goals. That probably won't happen overnight, though, because the company also sees opportunities to use the cash either to make acquisitions or to bring more plants online.

Risks to be aware of

As I see it, there are three risks investors need to consider before purchasing shares. The first is the simple fact that over the long run, there's the strong possibility that other forms of energy inputs -- like wind and solar -- could gain more favor as they become more feasible. However, the long-term contracts Enviva has signed put that possibility off by at least a decade (the average length of its current contracts).

The second threat comes from increased demand. As others see how profitable Enviva has made the business, they will likely join. As you can see from the list below, Enviva -- though the largest -- is hardly alone in the sub-industry. And Graanul Invest is building out capacity to come within a stone's throw of Enviva. 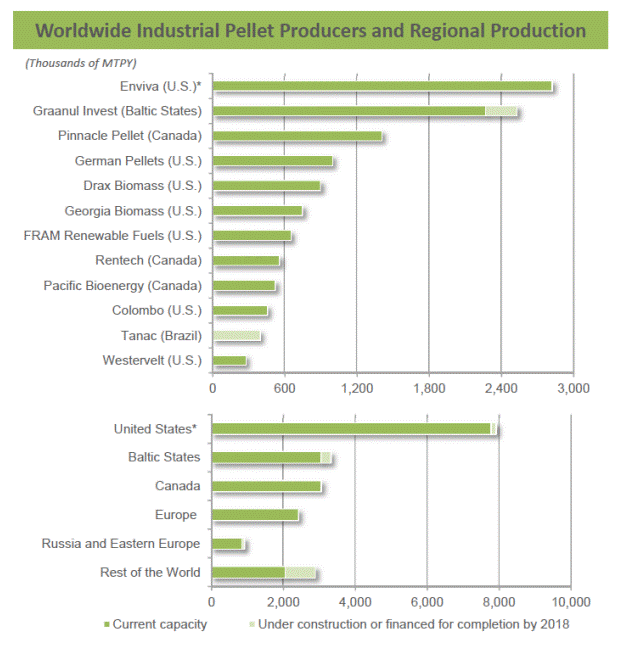 Here again, Enviva's long-term contracts offer some protection. This would really start to show up in the company's backlog, with future contracts yielding less profit per metric ton than they currently do ($44.35 per metric ton).

Perhaps the most interesting risk, though, might be a cultural one. As I noted in my previous piece, the company's (current and former) employees have absolutely blasted management on Glassdoor.com, and those trends have continued. The picture that emerges is a toxic corporate culture where management is growing the company far too fast, with employees burning out and a revolving door starting to form.

So far, none of those concerns have hampered results for shareholders. And if the company can continue to meet its production goals, these concerns will likely all be moot, but they are worth considering before putting your money down on this very cheap high-yield dividend stock.