About 100 years ago, German industrialist Linde AG sold its American unit, then known as Linde Air Products, to Union Carbide -- which in turn spun off the subsidiary in 1992, naming it Praxair (NYSE:LIN). But 100 years later, Linde and Praxair are getting the band back together. Last week, the companies announced plans to join forces in a "merger of equals."

When consummated, the merger should create a new industrial giant with $30 billion in annual sales and a market capitalization in excess of $64 billion.

Here's what you need to know about it. 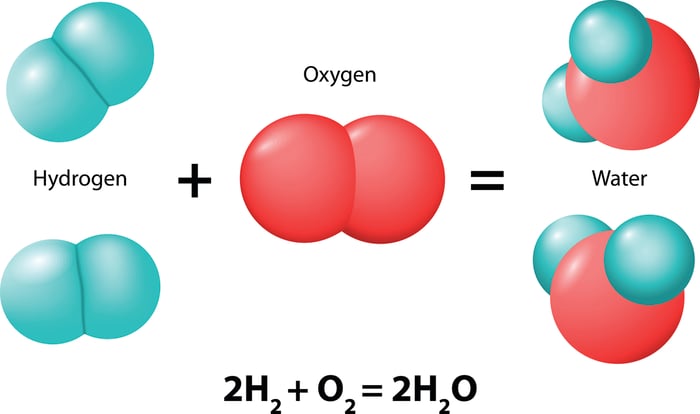 Broadly speaking, both Linde and Praxair are in the "gas" business, but not by owning your corner filling station. Rather, they're in the business of producing chemicals in gaseous state -- oxygen, nitrogen, hydrogen, and so on -- for use in medicine and industry.

It's a big business ($30 billion annually), and a profitable one. According to data from S&P Global Market Intelligence, Linde generated operating profit margins of 11.5% over the past 12 months, while Praxair is doing closer to 22.1%. Linde does more revenue -- $18 billion annually -- while Praxair at $10.5 billion in sales sells less but makes more profit off each revenue dollar.

Up until the merger was announced, investors liked Praxair's approach a bit better, valuing the stock at $33.5 billion, versus Linde's $30.6 billion market capitalization. But basically, the two companies are pretty closely aligned, both in the business they conduct and the money they make off it.

Accordingly, the companies are structuring this as a true merger of equals, with shareholders in each company ending up owning a 50% interest in the combined company -- which, in a nod to history, will once again go by the name of Linde. Because of the differences in share prices and shares outstanding, however, to get to this 50-50 split will require giving each current Linde shareholder 1.54 shares in the combined company, while Praxair shareholders will have to content themselves with a straight 1-for-1 exchange.

As for when the deal will close, this remains uncertain. The company's expect it will take months to complete their internal approvals, execute, and approve a merger agreement, and obtain regulatory green lights around the world. Potentially, getting regulators to OK the merger will require selling off pieces of either or both companies to defuse antitrust concerns -- and even then, there is no assurance that the merger will ultimately succeed.

But what if it does? Linde and Praxair agree that by merging their operations, they stand to reap $1 billion in annual synergies -- money that can be saved and lead to higher profits. With Praxair earning $2.3 billion a year pre-tax, and Linde $2.2 billion, those savings represent an opportunity to boost profits by as much as 22%, in one fell swoop.

Valuing the new and improved Linde 2.0

After tax, that should work out to perhaps $3.4 billion in annual profits for the combined company. On a market capitalization of $64.4 billion, that works out to about 19 times earnings for Linde 2.0. The price-to-sales ratio would be 2.1.

And free cash flow? Currently, Linde is generating about $2.1 billion; Praxair, $1.4 billion in cash profits. Assuming free cash rises in proportion to the promised increase in net income, this implies that the new firm could be churning out cash at the rate of $4.3 billion a year -- and selling for a valuation of as little as 15 times free cash flow.

Believe it or not, industrial gas is not the sexiest growth industry on the planet. Current estimates on S&P Global see Praxair growing its smaller business by about 15% annually over the next five years, but Linde is only expected to expand at about an 8% rate. Blend those two numbers, and we're probably only looking at long-term growth rates of about 11% for the firm, after the initial windfall from cost-saving synergies -- assuming those ever arrive.

Still, if we further assume that a merged Linde-Praxair will maintain both pre-existing companies' commitment to paying modest dividends -- Linde currently pays 2.2%, and Praxair 2.5% -- then the valuation here looks about right, resulting in about a 13% total return on a stock from growth and income, costing 15 times free cash flow.

It's not a bargain by any stretch, which probably explains why both stocks are down modestly since the merger was announced. In fact, you have to depend pretty heavily on seeing Linde 2.0 deliver the promised synergies even to call the valuation fair.

But if the synergies arrive as promised, then that's what it is: a fair price, and a decent deal.