When Brian Moynihan took over as CEO of Bank of America (NYSE:BAC) at the beginning of 2010, the cards were stacked against him. He was young, only 50 at the time. He assumed control in the midst of an existential crisis at the bank. And while he had support on the board of directors, most of them had Moynihan's predecessor, Ken Lewis, to thank for their board seats.

Fast-forward to today, however, and these things have changed. Moynihan is now an old hand at running Bank of America, having steered it through the toughest stretch of its history. And thanks to the ongoing evolution of the bank's board, it's safe to say that Moynihan now oversees the bank with more leeway than at any time over the past six years. 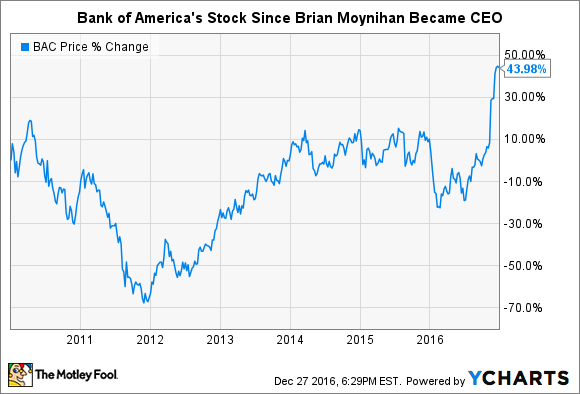 You can get a sense for this by comparing the composition of Bank of America's board of directors in 2009, the year Moynihan was promoted to CEO, to its board today.

In 2009, all 18 members had joined the board under Lewis or his predecessor Hugh McColl's tenures. It was thus somewhat of a surprise that Moynihan was chosen as CEO in the first place, given that he was a relatively recent addition to Bank of America, joining the bank via its 2003 merger with FleetBoston Financial.

If Lewis had his way, in fact, Moynihan wouldn't have been chosen as CEO. Lewis recommended Bank of America's former chief risk officer, Gregory Curl, to succeed him. Curl and Lewis shared a similar lineage at the bank. Moynihan was Lewis' second choice.

Moynihan nevertheless got the nod, thanks in no small part to the fact that three of the six members on the board's executive search committee joined Bank of America, as Moynihan did, by way of the FleetBoston merger. He had strong allies where it mattered most.

Bank of America's board today

Since then, Bank of America's board has transformed considerably and is now much more innately sympathetic toward Moynihan. The most obvious indication of this was Moynihan's election to be chairman of the board in 2014.

But just as importantly, 10 of the 14 directors on Bank of America's board have joined since Moynihan became CEO. This implies that they are more inclined to be his partisans as opposed to dividing their loyalties with his predecessors. Another director joined the same year Moynihan was elected CEO. Another traces his roots to FleetBoston, and the remaining two are holdovers from Lewis' time as chairman and CEO.

In short, by becoming chairman and radically transforming the composition of the remainder of the board of directors, Moynihan has gone a long way toward consolidating his power atop Bank of America.