Four years ago, software giant Microsoft (NASDAQ:MSFT) appeared to be in trouble. Windows 8, launched in late 2012, was generally considered a failure, pushing its touch interface to the point of alienating PC users. Microsoft's efforts to reassert itself in the smartphone market were a disaster, with the 2013 acquisition of Nokia's phone operations eventually written off. Even the wildly profitable Office suite seemed to be at risk, with Alphabet's Google pushing a free alternative.

Under CEO Satya Nadella, who took the reins in 2014, Microsoft has quickly rebounded. Windows 10 has replaced Windows 8, proving far more successful. Microsoft's portfolio of software has been moved to a subscription business model, with Office 365 trouncing Google's offerings. And the company has invested heavily in cloud computing, making its Azure cloud platform a strong No. 2 player. All of this progress has led the stock to surge. 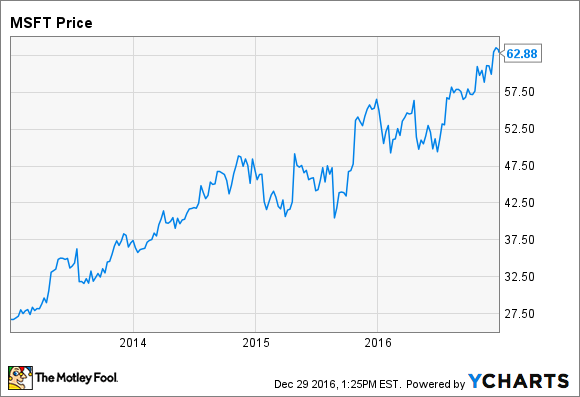 With Microsoft in a much stronger position today, dividend investors have a lot less to worry about. Microsoft pays a solid dividend, and with the business doing well, that dividend will have room to grow in the coming years.

Microsoft has made a habit of raising its quarterly dividend each year. The company took a breather during the financial crisis, but the dividend has increased substantially since then. The company currently pays shareholders $0.39 per share each quarter, triple what it paid in early 2010. That's good for a dividend yield of roughly 2.5%.

Heavy investments in cloud computing, the decision to give Windows 10 to consumers for free, the shift to subscription software, and the struggling phone business have all been weighing on earnings. The good news is that free cash flow, which is what ultimately pays for dividends, has remained roughly flat since fiscal 2011. Microsoft produced $25 billion of free cash flow in fiscal 2016, with dividends eating up just 45% of that total.

Even without much free cash flow growth, Microsoft still has room to increase the dividend at a high-single-digit pace for years. An 8% annual increase for the next five years would push the free cash flow payout ratio up to about 66%. Share buybacks, which reduce the share count and thus the total cash required to pay the dividend, would push the payout ratio lower. And any free cash flow growth could allow Microsoft to provide investors with more generous dividend increases.

Given how big Microsoft already is, growing the free cash flow substantially won't be easy. The market for PCs is still slumping, and Microsoft has no real presence in the smartphone market. The company has found success with other devices, like its Surface line of tablets and its TV-like Surface Hub, which is reportedly selling well. But Microsoft's biggest cash cows -- Windows and Office -- are still tied to the PC.

Cloud computing is a big opportunity, as is augmented reality, which could change the way people interact with computers. Microsoft has been showing off its HoloLens augmented reality headset, and devices built on Windows Holographic could put Microsoft at the center of a major shift in computing. Microsoft may have missed the boat on smartphones, but HoloLens shows that it won't make that mistake again.

All of these moving parts make it difficult to predict Microsoft's earnings in the long run. With the payout ratio based on free cash flow approaching 50%, double-digit annual dividend increases may be a thing of the past. But barring an unexpected drop in earnings, Microsoft should be able to continue to reward shareholders with annual dividend increases. A high-single-digit annual increase is probably the most investors should expect, but bigger dividend hikes are possible if one of Microsoft's major initiatives pays off.