Get the latest Macy's stock news and facts.

Shares of Macy's (NYSE:M) soared in November, rising more than 20% in the span of a few weeks thanks to growing optimism about its prospects. While the retailer posted weak earnings for the third quarter, it offered upbeat earnings guidance for the fourth quarter and made significant progress in conjunction with its strategy to monetize underutilized real estate. 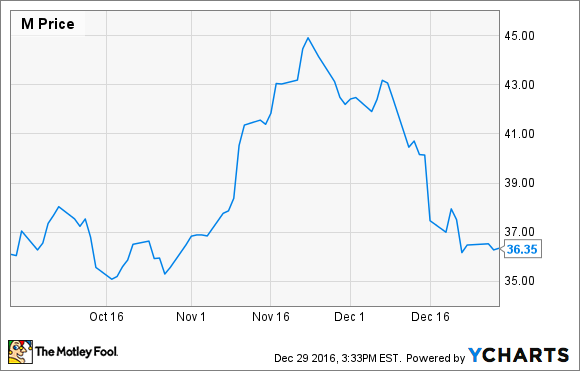 Yet in the month following Thanksgiving, Macy's stock gave back virtually all of its gains. Investors appear to be worried about reports of weak sales and heavy discounting among department stores.

First, Macy's plans to close about 100 stores next year. So far, the company has identified just a few of those locations, but it aims to close a combination of underperforming stores and stores that sit on valuable real estate.

While most of these locations are still modestly profitable, Macy's will be able to capture some of the sales from stores it closes at nearby locations and through its e-commerce site. It also plans to cut corporate overhead costs. As a result, Macy's should be able to rebuild its pre-tax profit margin from the roughly 5%-6% level expected in fiscal 2016. (More cooperative weather would also help.)

Second, Macy's would be a big beneficiary if President-elect Donald Trump follows through on his plan to cut corporate taxes. Trump has proposed reducing the corporate tax rate from 35% to 15%. While many U.S. companies already pay less than 35% because they earn some income abroad or benefit from various tax credits, Macy's effective tax rate has been 36%-37% recently.

Thus, Macy's tax burden could fall by more than half as early as next year. Some lawmakers want to end the tax-deductible status of interest payments, which would be a partial offset. However, the net effect would still be a $250 million-$300 million reduction in Macy's annual tax liability.

This year, Macy's is on track to post adjusted net income of a little less than $900 million, excluding asset sale gains. Even if Macy's revenue falls to $24 billion by fiscal 2018 due to store closures and modest comp sales declines, with a 7% pre-tax margin and a 17% effective tax rate, its net income would reach $1.4 billion, up more than 50% from this year. (If interest payments become non-deductible, net income would likely be $50 million-$60 million lower.)

Macy's recently started to sell the real estate associated with the 100 stores it plans to close. The company may be nearing a deal to sell its flagship store in Minneapolis. At more than 1 million square feet, the building is almost certainly worth more than $100 million. Most of the stores Macy's is likely to close are on much less valuable land, but even at $5 million-$10 million per store (on average), the total proceeds will really add up.

Macy's Manhattan flagship store may be worth $4 billion. Image source: The Motley Fool.

Furthermore, Macy's announced a strategic alliance with Brookfield Asset Management in November. Brookfield will have two years to create pre-development plans for 50 Macy's locations. This could ultimately open up additional opportunities for Macy's to sell land for redevelopment.

Finally, Macy's continues to explore options for monetizing some of the value of its massive flagship stores in Manhattan and Chicago. Both stores are larger than they need to be. By downsizing them and selling off the excess space, Macy's could potentially bring in cash proceeds of more than $1 billion.

It will take years for Macy's to turn its undervalued real estate holdings into cash. This just means that investors can expect a fairly steady stream of cash from real estate sales over the next few years.

Investors will see a flood of cash

This free cash flow is enough to cover Macy's generous dividend -- which currently offers a 4.2% yield -- while leaving extra cash for debt reduction and share buybacks. As Macy's completes more real estate deals in the coming years, the company will be able to return even more cash to shareholders.

For patient investors, Macy's stock has a ton of upside. As a result, I bought additional shares last week.