Stock market strategists are forming a tight herd when it comes to forecasting the S&P 500's prospects in 2017, demonstrating the absurdity of this game. Investors should be paying more attention to something that matters: forecasts of mediocre long-term returns. 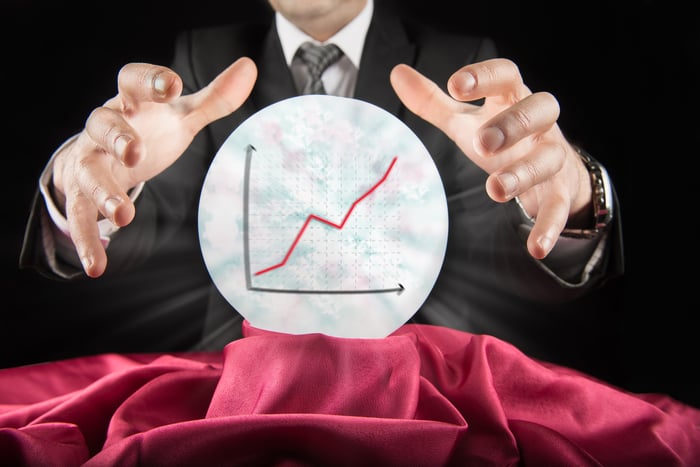 As 2017 shows 2016 the door, professional investors, strategists, and financial journalists participate in a time-honored tradition: the annual stock market forecast. Let me be clear: Trying to divine what 2017 holds for the S&P 500 Index (^GSPC -0.10%) is a fool's – small "f"-- errand. Let me explain why, and I'll give you an alternative stock market forecast to ponder -- one that's a lot more robust and relevant.

According to a Bloomberg article dated Dec. 21, "At 2,356, the average forecast called for the S&P 500 to rise almost 4 percent in 2017 from its latest close, a return that's about one-third of the 11 percent gain seen this year." Four percent isn't much, but more interesting -- confounding, really -- than the average is the spread between the forecasts:

Biggest bull is Jonathan Golub at RBC Capital Markets, who has a year-end target of 2,500. Five strategists, including Goldman Sachs Group Inc.'s David Kostin, Julian Emanuel of UBS AG and Bank of America Corp.'s Savita Subramanian, are tied for the least bullish, with a forecast of 2,300 -- just 30 points from Tuesday's close.

In other words, the spread between the least and most bullish forecasts is just 8% [(2,500 – 2,3000)/2,500 ]. The tight grouping of those forecasts brings to mind art critic Harold Rosenberg's expression, "the herd of independent minds." (Indeed, as the article notes, "For the third year in a row, every strategist surveyed by Bloomberg is bullish.")

To see why this spread is confounding, let's see how it compares to reality, i.e., the S&P 500's actual annual performance during the period between 1951-2016:

Data source: Author's calculations based on data from Yahoo! Finance.

No one knows this about stocks

Here's the blunt truth: No one knows where the S&P 500 will be 12 months from now. Goldman Sachs CEO Lloyd Blankfein has no idea (nor do any of his people). Federal Reserve Chair Janet Yellen is clueless on the topic. Billionaire investor Warren Buffett has said on multiple occasions that he is unable to forecast what the market will do looking out over 12 months and that such considerations have no impact on the way he invests.

To repeat: No one, no matter how smart, educated, connected or successful, has any idea what the stock market will do over the next 12 months. Every forecast you read on this topic is nothing more than guesswork dressed up as analysis and every person who tells you differently either doesn't understand the stock market or (more likely) is trying to sell you something.

2 things we know about stocks

On the other hand, here are two things we do know about stocks:

The following table demonstrates the second proposition -- notice the difference in the range between upper and lower quintile values between annual returns and annualized returns:

Data source: Author's calculations based on data from Yahoo! Finance.

In light of those two observations, I asked a luminary on stock market valuation, finance blogger Jesse Livermore, for his long-term return forecast for the S&P 500. This is his answer from Dec. 21 (my emphasis):

I think the market [is] expensive, more expensive than at any other point in this cycle, or the last cycle. Using my estimate from Dec. 2013, I see 2-3% nominal returns over the next seven to 10 years -- that's total return [i.e., inclusive of dividends].

Prepare to be underwhelmed

Given that the dividend yield on the S&P 500 is 2.1%, this forecast implies little, if any, price appreciation. A 2% to 3% average annual return is significantly lower than the historical average (the annualized average price return alone for 1951 through 2016 was 7.4%). That's worth pondering, particularly in an environment in which investors are fleeing actively managed funds and flocking to index funds.

Alex Dumortier, CFA, has no position in any stocks mentioned. The Motley Fool has no position in any of the stocks mentioned. Try any of our Foolish newsletter services free for 30 days. We Fools may not all hold the same opinions, but we all believe that considering a diverse range of insights makes us better investors. The Motley Fool has a disclosure policy.