Eleven billion dollars. That's a number Berkshire Hathaway Inc. (NYSE:BRK.A)(NYSE:BRK.B) CEO Warren Buffett, who has been obsessed with quantifying things since childhood, ought to appreciate. It's the increase in his net worth in 2016, according to the Bloomberg Billionaire Index -- that's an average hourly rate of accumulation of roughly $1.25 million!

Another fact may appeal to Buffett's competitive nature: He surpassed all his billionaire peers in terms of the dollar increase in his net worth. Beyond these headline figures, however, there are other numbers – and business principles -- that say more about how he achieved his uncommon success.

The following table shows the five billionaires who scored the largest dollar increases in their net worth in 2016. I excluded members of the Mars family, because their wealth is inherited and because Mars is a private company. 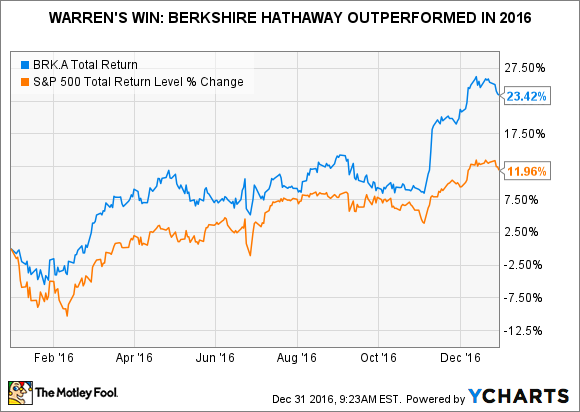 Names like Buffett, Gates, and Bezos are inextricably linked to the companies they founded: Berkshire Hathaway, Microsoft, and Amazon.com.

Strictly speaking, Warren Buffett didn't found Berkshire Hathaway; he acquired a majority interest in a declining textile business. However, his stewardship of Berkshire over the past half-century has transformed the company to such a degree that the question of whether he founded it is academic. The same is true of Bernard Arnault's LVMH Moet Hennessy Louis Vuitton.

Note that while all the owner-operators in our list have retained the vast majority of their net worth in the companies they oversee (note that Bill Gates is not involved in the day-to-day running of Microsoft), Buffett is at the top end of that ranking, with nearly 99% of his net worth still held in Berkshire shares:

In Buffett's case, this is entirely deliberate. Indeed, the second "owner-related business principle" in Berkshire Hathaway's Owner's Manual, which he drew up in 1996, states:

2. In line with Berkshire's owner-orientation, most of our directors have a major portion of their net worth invested in the company. We eat our own cooking.

On the face of it, that lack of diversification runs contrary to basic rules of financial prudence, but two things are different here: One, Buffett runs Berkshire Hathaway, and, two, the fact that it is one stock masks the underlying business diversification. As Buffett writes in the next paragraph:

Charlie and I feel totally comfortable with this eggs-in-one-basket situation because Berkshire itself owns a wide variety of truly extraordinary businesses. Indeed, we believe that Berkshire is close to being unique in the quality and diversity of the businesses in which it owns either a controlling interest or a minority interest of significance.

That willingness to keep his eggs in one basket is one of the reasons Buffett remains the largest single shareholder of Berkshire Hathaway:

Another deliberate factor that has kept Buffett's stake so high: He is extremely stingy when it comes to issuing new Berkshire stock, which would dilute existing shareholders. The reluctance to issue shares is not based on the mathematics of share dilution per se, but with the risk of value dilution, as the 10th owner-related business principle explains:

10. We will issue common stock only when we receive as much in business value as we give. This rule applies to all forms of issuance -- not only mergers or public stock offerings, but stock-for-debt swaps, stock options, and convertible securities as well. We will not sell small portions of your company -- and that is what the issuance of shares amounts to -- on a basis inconsistent with the value of the entire enterprise.

Refusing to diversify his stock portfolio for the sake of diversification, being a business-focused investor and a value-conscious owner: Those are some of the key traits that, along with the powerful effect of compounding, have set Warren Buffett up to make staggering wealth gains.

Of course, what the stock market gives over the course of 12 months, it can easily take away over the next 12. But that doesn't mean wealth is illusory; at roughly one and a half times book value or 20.4 forward earnings, shares of Berkshire Hathaway look fully priced, but not overvalued.