Shares of chemical company Chemours (NYSE:CC) dropped 10.2% in December. For the year, though, the stock was up more than 300%. A mid-month civil trial loss by Chemours' former parent company, DuPont (NYSE:DD), may have played a part in the slide. 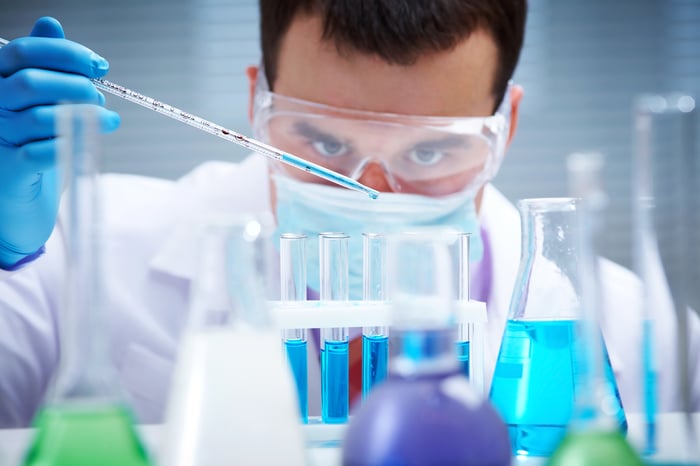 There wasn't a single clear reason for the stock's sharp December decline, although stocks of other companies selling titanium dioxide like Kronos and Tronox (the orange and red lines on the chart below) were down more modestly: 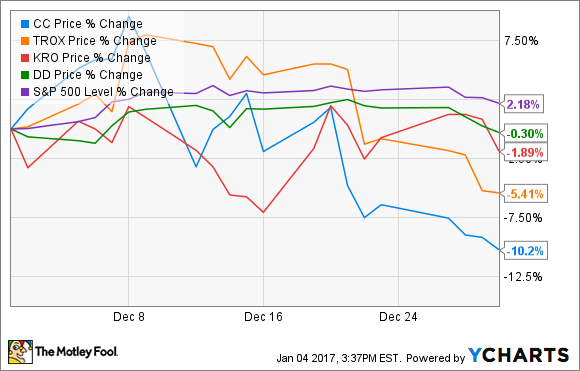 One major event that could have a big impact on the company came mid-month, as DuPont was found liable in a civil trial related to the company's manufacture of the toxic chemical PFOA. The company was hit with a $2 million judgment, which comes after two prior million-plus-dollar judgments against the company. (DuPont is appealing all three.)

That's problematic for Chemours, which -- as part of its spinoff -- agreed to indemnify DuPont against all PFOA-related claims. Chemours has since made statements in which it seems to dispute the extent of its liability. However, that liability is hardly news for the company or its investors, given the prior court losses. DuPont's stock barely budged for the month.

It's also possible that, at the end of a year in which the stock price more than quadrupled, investors were just looking to lock in some of those gains and sold off some shares.

Chemours' 10% December loss is just a blip on the radar compared with its overall 2016 gain of 303.1%. But that figure is misleading. The company had a disastrous 2015 after its spinoff from DuPont, with shares crashing 74.3%. Even with the stock's big 2016 gains, investors who held shares from the beginning have gained only 5.9% (which, now that those investors are in positive territory, may have helped to spark the sell-off).

Plus, as mentioned above, the company has big problems in the form of legal liabilities for PFOA and other former DuPont products, as well as environmental liabilities with which it was also saddled by its former parent. Those liabilities could run into the tens of billions of dollars. Wise investors should probably steer clear.