Shares of Halozyme Therapeutics (NASDAQ:HALO), a commercial-stage biotech focused on creating products that enhance drug delivery, rose by as much as 30% in early morning trading on Thursday before settling down. The huge stock swing was in response to the company reporting data from an important a Phase 2 clinical trial. As of 11:00 a.m. EST, shares were up by more than 12%. 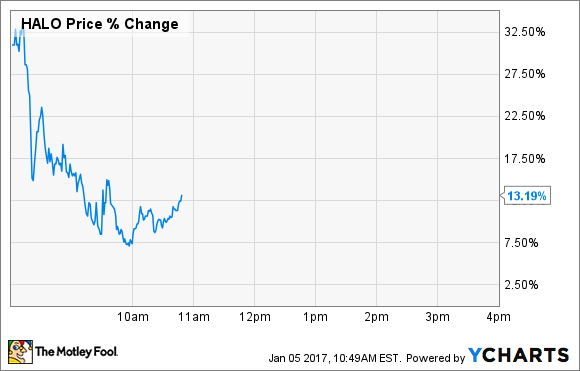 The headline numbers from the press release were quite encouraging. The study achieved its primary endpoints, which were a statistically significant improvement in progression-free survival (PFS) in all evaluable patients and a reduction in Thromboembolic events.

Halozyme was especially proud of data that came from the subset of patients that displayed high levels of hyaluronan. In this cohort, the patients who used PEGPH20 in combination with Abraxane and Gemzar showed a median progression-free survival (PFS) of 8.6 months. That was a 91% improvement over the 4.5 months that was observed in the group of patients who displayed high levels of hyaluronan and only received Abraxane and Gemzar alone.

Dr. Helen Torley, Halozyme's CEO, was happy with the study's results, stating "These findings confirm our confidence in the development of PEGPH20 in this difficult-to-treat cancer." She also noted that the company's Phase 3 clinical trial -- called HALO 301 -- is currently under way at more than 160 sites worldwide.

While Halozyme's stock initially spiked in response to the press release, it has since given back a lot of the gains. That's likely because some market-watchers are pointing out that the strong PFS data was only achieved in the subset of patients who displayed high levels of hyaluronan. That was only a secondary endpoint of the study, which is a perfectly valid criticism.

However, it is worth noting that PEGPH20 is designed to break down the hyaluronan barrier, which is a chain of natural sugars that accumulate around certain tumors and prevent drugs from reaching their target. Thus, it makes sense that patients who had higher levels of hyaluronan in their body would see more of a benefit from using PEGPH20 in combination with the other drugs than patients who do not.

Regardless of Thursday's short-term price movement, Halozyme's Phase 3 HALO-301 remains the study to watch. This trial's primary endpoints are to measure the changes in progression-free survival and overall survival in patients who have high levels of hyaluronan. Thus, the data readout from that study should give investors a much better idea of the drug's chances of winning regulatory approval and having success in the marketplace. However, data from HALO-301 isn't expected to be available until late 2018. That means that bulls and bears alike will have plenty of time to debate the merits of this Phase 2 data while we wait for the next readout.