Investors in Halozyme Therapeutics (NASDAQ:HALO), a small-cap biotech focused on products that enhance drug delivery, had a 2016 to forget. The company put its shareholders on a gut-wrenching roller-coaster ride during 2016, ending the period down more than 40% from its starting point, according to data from S&P Global Market Intelligence. 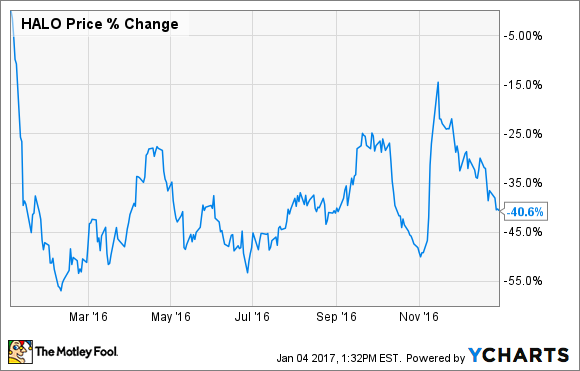 Here are some of the highlights that affected the company during the year:

Given the mix of news, it's easy to understand why the company's share price was all over the map during the year.

Looking ahead, Halozyme continues to offer investors reasons for optimism. The company just reported intriguing results from a Phase 2 study that is testing PEGPH20 in combination with Celgene's Abraxane and Eli Lilly's Gemzar in treating patients with stage IV pancreatic cancer. This tough-to-treat disease is the third-leading cause of cancer-related deaths in the U.S. each year.

Beyond PEGPH20, the company continues to boast a who's who list of partners that are exploring a range of exciting product candidates. While we wait for those products to work their way through clinical trials, shareholders should continue to see revenue push higher over time from increased royalty revenue on sales of drugs like Herceptin SC, MabThera SC, and Hyqvia.

All in all, I continue to believe Halozyme could be a high-risk biotech stock that's worth nibbling on. With shares currently trading at a discount, it seems like as fine of a time as any to consider getting in.