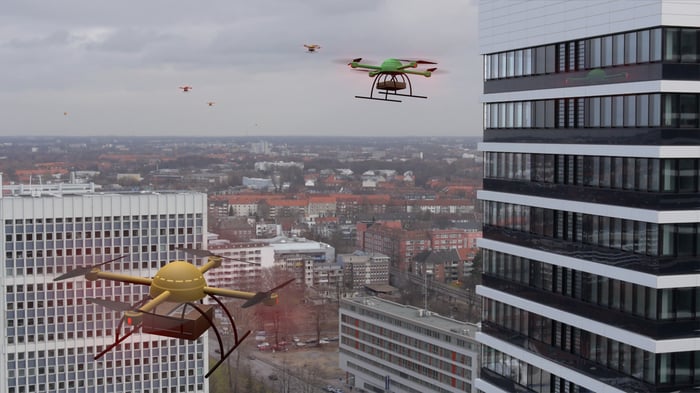 Amazon.com (NASDAQ:AMZN) always seems to be ahead of the curve, but in recent weeks the company has made a tidal wave of advances showing off the strides it's made.

Of all of Amazon's innovations, the airborne warehouse and the system of drones to go with it seems to be the most fantastical. The tech giant envisions the blimp hovering at an altitude of 45,000 feet, from which the drones could make deliveries of game-related merchandise or food. Amazon has filed hundreds of patents in its history, and just because it's patented such an airborne fulfillment center doesn't mean it will become reality. However, Amazon is committed to making drone delivery a core component of its business.

Taking over the skies

Amazon CEO Jeff Bezos went on 60 Minutes in December of 2013 to show off his company's Prime Air program, or what it calls drone delivery. Though it took more than three years since then for the first delivery to happen, the company has taken significant steps toward a future based on drones.

Amazon envisions a world where most of its deliveries take place via drone. Its current fleet can handle packages of up to five pounds, which accounts for 80-90% of its shipments. According to Deutsche Bank, widespread drone delivery could cut the cost of retail goods by as much as half, dramatically transforming the retail industry as it could eliminate the need for most stores.

As Amazon recently demonstrated, it's capable of performing drone deliveries, but regulatory hurdles still stand in the way in much of the world. The company has had success before in bending government rules, convincing the US Postal Service to deliver its packages on Sunday and persuading the Federal Aviation Administration to allow use of electronic gadgets like Kindles end-to-end on flights.

Now, Amazon is again hammering out new rules with the FAA, but thus far the agency has not permitted such unmanned deliveries. Under current stipulations, drones must remain within view of the pilot, making delivery currently unfeasible.

That explains why Amazon has focused on the UK and other countries such as Australia and France for its initial testing.

Amazon isn't the only company focused on drones. Rivals, including Alphabet (NASDAQ:GOOG) (NASDAQ:GOOGL) and Wal-Mart, have been investing in the aerial technology as well. Wal-Mart is testing drones to assist with inventory at its warehouses, using the flying machines to track and manage merchandise. It's a move bankruptcy attorney Isaac Marcushamer, who studies industry disruption, said is one of many move designed to keep pace with Amazon, much like its $3.3 billion acquisition of Jet.com.

Meanwhile, Alphabet's own drone initiative, Project Wing, hit some roadblocks recently as two executives left the division and Starbucks pulled out of a food delivery test. Alphabet aims to create a food delivery marketplace where customers can order delivery by drone from the likes of Domino's Pizza or Chipotle for $6.

With Amazon Go, Alexa, AWS, and other innovations, Amazon has a track record like no other company in innovating new business and using them for competitive advantage. It's the company that stands to gain the most from drone delivery and has put the biggest effort into it, so it's therefore likely to be the leader in the future.

Industry insiders say regulations are the biggest obstacle right now, and envision drone deliveries becoming commonplace in five or ten years. While we may never see an airborne blimp as a delivery hub, the momentum in drone delivery is fast gaining speed. Pretty soon, it may be inevitable.