Saying that you're going to buy a stock and never sell it seems a bit audacious. And in truth, it is: The future is simply unknowable. But I've owned shares of Alphabet (NASDAQ:GOOGL)(NASDAQ:GOOG) -- formerly known as Google -- for almost a decade, and I can't fathom a circumstance under which I'd consider parting with my shares.

Currently, shares of the company make up a whopping 13% of my family's real-life stock holdings. But we're totally comfortable with that allocation.

1. The company's flagship product has a dominant market (and mind) share

If you're sitting around the dinner table arguing about a provable fact, you resolve the dispute by simply "Googling" the answer. The fact that the name is so embedded in our lexicon speaks volumes to the search engine's dominance.

According to Statista, Alphabet's Google search owns 88.6% of the global market on desktops. And perhaps more important, according to NetMarketShare, it commands 94.9% of the mobile search market share globally.

2. It boasts six other products with over 1 billion users

But as you're probably well aware, Google is much more than just search. It has six other applications with over 1 billion users. These are Gmail, YouTube, Google Maps, Chrome, Android, and Google Play Store.

"Sure," you might say, "but the company doesn't charge for most of those products. That's not great business." 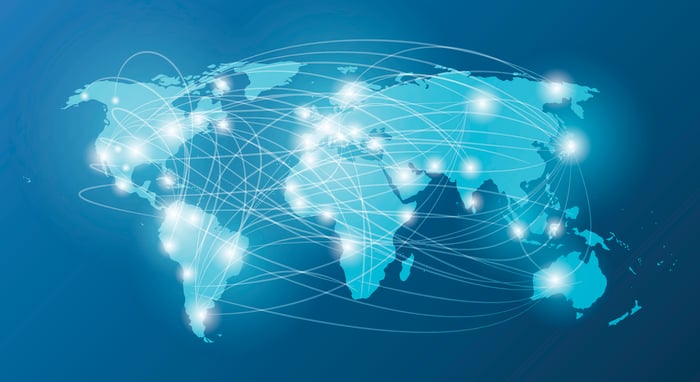 While you'd be right, you'd be missing out on what's dubbed the "oil of the information age": data. With every user in all seven of those aforementioned apps, the company is able to collect gobs of data. In fact, I don't think it would be too hard to argue that Google has more data on the people walking this Earth than any other organization, at any other time in human history.

4. At its heart, it is still an advertising company

That data is worth billions to advertisers. In the old days, companies would try to target their audience by putting ads in magazines or newspapers where potential customers might be lurking. But the feedback loop wasn't great: Advertisers never knew just how effective that ad spending was.

Not so anymore. With Google's advertising platform, companies get real-time feedback on how efficiently their ads are being placed, and how much business they produce. Given the data hoard that the company has, ads placed through Google can be more targeted to the perfect customer than any other available source. That's a huge moat for the company.

It also helps explain why Google advertising brought in $79 billion in sales last year for the company, or 88% of all revenue.

5. Digital ads are poised to grow

If you think you've missed the boat, rest assured you haven't. A March 2016 report from eMarketer shows that there's still a lot of room for internet advertising to grow. 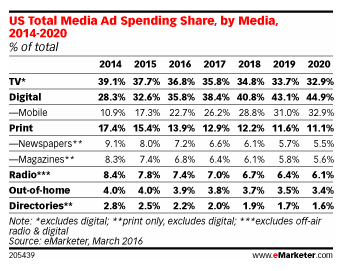 And with TV estimated to still retain one-third of the global market share in 2019, I can only imagine that the runway for internet ad growth will continue for much of the next decade.

6. The company is more than a one-trick pony

Back to that name change, from "Google" to "Alphabet." You might better understand the reasoning if you look at the new corporate name as "Alpha-Bet." This rendering of the name reflects the company's practice of taking a lot of moonshot bets on revolutionary technologies outside its main search and data-capturing business.

This is what famed trader, academic, and thinker Nassim Taleb would call a barbell approach: having a large, reliable stream of revenue on one side while taking lots of small bets on the other. While the likelihood of any one moonshot succeeding is small, all it will take is one or two winners over the next decade to make a meaningful difference for shareholders.

What are these moonshots? We probably don't know all of them, but the ones we do include self-driving cars, a connected home, a life sciences company, and lightning-fast internet connection.

7. Its mission statement is memorable

I'm a sucker for a good mission statement. When it is clear and powerful, it can be the compass that helps guide management and employees alike toward a common goal.

Google's mission statement is: "To organize the world's information and make it universally accessible and useful."

The mission of parent company Alphabet is multifaceted but can be broken down to: "Getting more ambitious things done[,] ... empowering great entrepreneurs and companies to flourish ... [and] as a result of all this, improving the lives of as many people as we can."

Those are both powerful and flexible enough objectives to keep the company relevant in a quickly changing world.

Lest you think that you might have a few executives who are in this for short-term gain, Alphabet is still run by its co-founders, Larry Page and Sergey Brin. Together, they -- along with all of the other company executives and board members -- own almost 45 million shares of Alphabet, and account for 58% of the company's voting power. To put the number of shares in perspective, it is equivalent to almost $45 billion at today's prices.

9. The proof is in the culture

Another angle that's often overlooked is a company's culture. If Page and Brin really do want to accomplish the ambitious goals they've laid out, they need a stable and motivated workforce to get things done.

To get an idea for the company's approach, a 2010 filing with the SEC stated that "[monetary] incentives are secondary to career growth, work environment, and engaging work opportunities. We seek to develop a highly motivated and collaborative workforce that pursues achievements for the sake of progress and innovation before individual gain."

Based on anonymous employee reviews on Glassdoor.com, I'd say the company is doing pretty well. 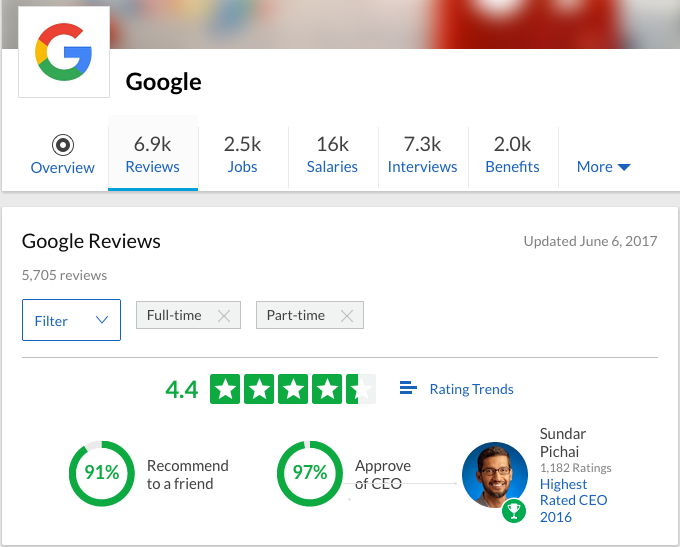 10. There is lots of cash to make it work

Finally, if you've got a company that's going to be taking lots of small bets that can be costly, it's good to know that management is sitting on a pretty expansive war chest. And that's what you get with Alphabet.

This, and the other nine reasons above, helps me sleep well at night knowing my family is invested in -- and likely won't sell for a long time -- such a company.