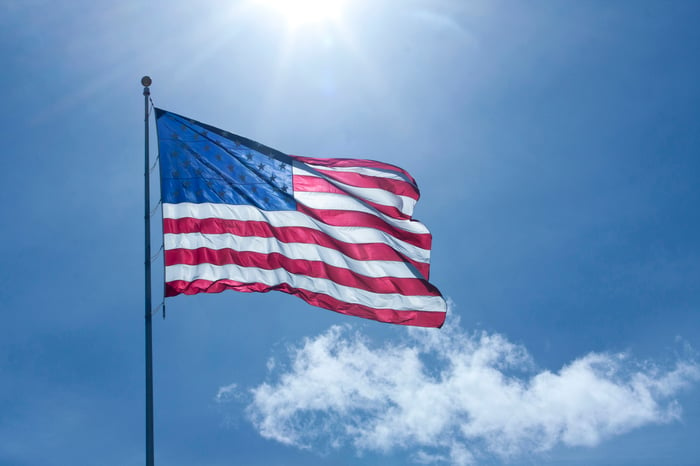 President-elect Donald Trump has promised to rebuild America's aging infrastructure with a massive spending plan estimated at more than $500 billion. Trump has also said that he will loosen regulation on businesses and lower taxes, all as a means to fuel American economic growth.

While getting Congressional approval for these programs may be challenging, investors who factor these potential policies into their investment decisions could position themselves for outsize gains in the years ahead, should these plans come to fruition. In this regard, here are two stocks that are poised to prosper under Trump's "Make America Great Again" vision.

Shares of the nation's second-largest bank have soared since the election. Perhaps more than any other major financial institution, Bank of America (NYSE:BAC) stands to benefit from Trump's economic policies.

Bank of America's profits were suppressed by the Federal Reserve's decision to maintain short-term interest rates at historically low levels in the aftermath of the financial crisis. Yet with the Fed's recent move to raise rates in December and increase its rate forecast for 2017, interest-rate policy is now likely to become a powerful tailwind that could propel Bank of America's earnings growth in the years ahead. In fact, Bank of America estimates that a 1-percentage-point increase in interest rates would boost its net interest income by $7.5 billion per year.

Bank of America also stands to benefit not just from looser regulation of financial institutions -- which could help to dramatically reduce compliance costs -- but also of corporations in general. When combined with Trump's promises of tax cuts and increased infrastructure spending, these more accommodative policies could lead to improved economic growth, which would likely fuel growth in Bank of America's deposit base and boost demand for loans.

And should regulators choose to loosen bank capital and liquidity requirements, Bank of America would be able to significantly increase both its dividend and share repurchase program. That would likely be met with applause from investors and could help to drive a continued rally in Bank of America's stock price.

Whatcha gonna do with all that junk?

President-elect Trump's infrastructure plan calls for hundreds of billions of dollars' worth of restorations and improvements to America's roads, bridges, tunnels, airports, railroads, ports, and pipelines, among other projects. Along with all the economic benefits such a plan could bring about, there's one thing all that construction would almost certainly produce: a whole lot of garbage. And no American company excels at profiting from trash as well as Waste Management (NYSE:WM).

The aptly named company is the leading provider of waste collection and recycling solutions in North America, serving more than 21 million customers in the U.S. and Canada. The trash titan owns the largest network of recycling facilities, transfer stations, and landfills in the industry -- a collection of nearly irreplaceable assets that should only grow in value should Trump's infrastructure plans usher in a new construction boom in the United States.