If you're on the prowl for value stocks after recent market volatility, check out these three.

Investors have witnessed a three-month stretch of market volatility thanks to trade tensions with China, higher interest rates, and concerns that this long-running bull market is about to lose its momentum. On the bright side, all that volatility means some stocks could be oversold or overlooked, giving savvy investors a chance to start a position.

Jeremy Bowman (United Natural Foods Inc.): For years, United Natural Foods was best known as the primary supplier of Whole Foods Market, which was in turn UNFI's biggest customer. However, that once-promising relationship changed when Amazon acquired Whole Foods. Although UNFI's contract with Whole Foods remains through 2025, Amazon could ditch UNFI, or negotiate a shorter-term contract with less-friendly terms for the supplier. In other words, the acquisition introduced a level of uncertainty to the natural-food supplier's future.

That's part of why UNFI acquired the supermarket operator and wholesale-food seller Supervalu last July for $2.9 billion, including liabilities. The deal created one of the biggest food wholesalers in North America, but it was pooh-poohed by Wall Street as the stock fell 16% on the news. It's continued to slide from there -- shares are now down 68% since the deal was announced. 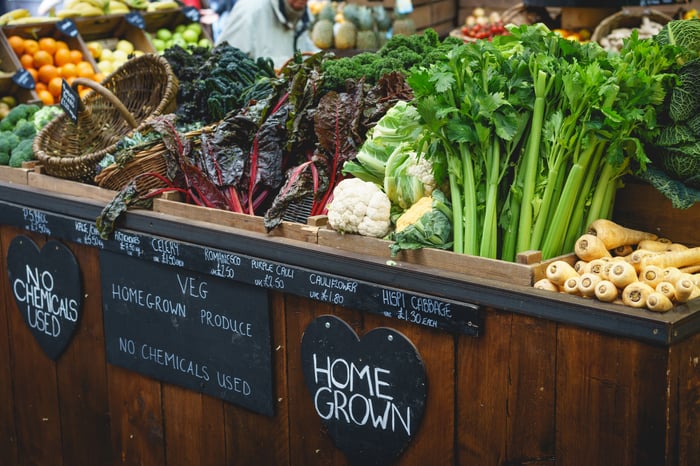 Supervalu has had problems as the company struggled to turn profitable when it was independent, but UNFI stock has dropped so far since then that its value has become hard to ignore. Shares trade at a price-to-earnings ratio of 7.4 based on this year's expected earnings. If the company can extract the synergies it's projected -- including more than $175 million by year three -- profits should move significantly higher, as management said the deal would grow earnings per share by double digits after the first year. UNFI also plans to eventually sell the Supervalu retail business, which should assuage some concerns about its debt burden.

The stock has already bounced back more than 30% since the market bottom on Dec. 24, and the company lifted its full-year guidance earlier in January. At this point, UNFI still looks oversold.

Daniel Miller (General Motors): There's plenty of doom and gloom in the automotive industry right now, as North America's sales plateau and trade tensions between the U.S. and China add uncertainty. That's pushed General Motors down to a forward price-to-earnings ratio of just under 6. However, despite all that pessimism, GM is doing really well, and offers investors a solid value stock heading into February.

GM officially releases its fourth-quarter and full-year 2018 results on Feb. 6. But it gave us a sneak peek earlier in January, when CFO Dhivya Suryadevara announced the automaker had done better than expected and its adjusted earnings per share would exceed the high end of its guidance. On top of doing better than expected during the fourth quarter, GM also anticipates 2019 to be a stronger year overall. Part of that strength will be driven overseas by the world's largest automotive market: China.

China's auto market took a rare breather in 2018 with its first full-year sales decline since 1990, but GM is prepared to offset some of that weakness with a slew of new models -- and fresher portfolios simply sell better. GM will roll out more than 20 new and refreshed models in China throughout 2019, a record for the automaker. Thanks to GM's strong profits from North America, as well as from GM Financial, the automaker is poised to have a strong 2019 regardless of what happens in China. But if its fresh lineup helps take a step ahead of competitors and boosts sales and profitability, it would be icing on the cake. Also, if China rebounds next year from its rare sales decline in 2018, it could boost GM's financial results more than investors are anticipating.

Despite the doom and gloom being passed around, General Motors is doing well now. Expect further proof with a strong fourth-quarter result due on Feb. 6.

A small multiple on this big bank

Jordan Wathen (Bank of America): Big banks are downright cheap, trading at earnings multiples that flirt with the single digits on any given day. As I write this, Bank of America trades for about 11 times 2018 earnings, and about 10 times what it could conceivably earn this year, making it one of my favorite bank stocks for 2019.

The thesis for Bank of America is that it does the hard part of banking (gathering deposits) about as well as any bank in the country. Through more than 4,300 offices, Bank of America has nearly $1.4 trillion in low-cost deposits, on which it pays an average interest rate of less than 0.50% per year. To put that in perspective, consider that short-term U.S. Treasury bills yield about two percentage points more than its average deposit.

Deposits are the raw material of the banking industry. Banks that have an advantage on deposit costs, as Bank of America does, can incur more operating expenses, make more bad loans, and still eke out higher-than-average returns for shareholders over time.

Recent performance at Bank of America has been phenomenal: Loan losses are near historical lows, operating expenses have plunged as a percentage of revenue, and the bank continues to build its deposit base at a slow and steady, single-digit annual clip. A combination of a low entry multiple and single-digit earnings growth over time should net buy-and-hold investors an impressive return over the long haul.

You Could Have Doubled Your Money With These 3 Stocks

Top Stocks to Buy to Invest in America

3 Top Stocks We Refuse to Sell