Investors in Agios Pharmaceuticals (NASDAQ:AGIO), a company focused on metabolic disorders, had a wild ride in 2016. The company's stock traded erratically all year long based on the headlines of the day, but it ultimately lost more than a third of its value during the year, according to data from S&P Global Market Intelligence. 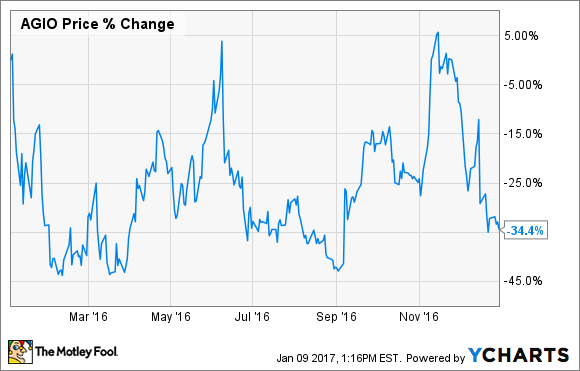 Here's a review of the key news releases that pushed the company's stock one way or the other:

Agios and Celgene recently announced that they successfully submitted enasidenib (AG-221) for FDA approval. They also announced their intentions to have AG-120 in regulators' hands before the end of 2017, which means that Agios is one step closer to finally becoming a commercial-stage organization.

With a balance sheet that is flush with cash and a strong partner like Celgene on its side, Agios and its investors have plenty of reasons to believe it will be able to bounce back strongly from the drubbing that it took in 2016.