Shares of microbrew specialist Craft Brew Alliance, Inc. (NASDAQ:BREW) jumped 12% in December according to data from S&P Global Market Intelligence after the company formed yet another partnership. As the chart below shows, the bulk of the gains came on December 15 when the company announced it had agreed to enter a strategic alliance with Miami's Wynwood Brewing Company. 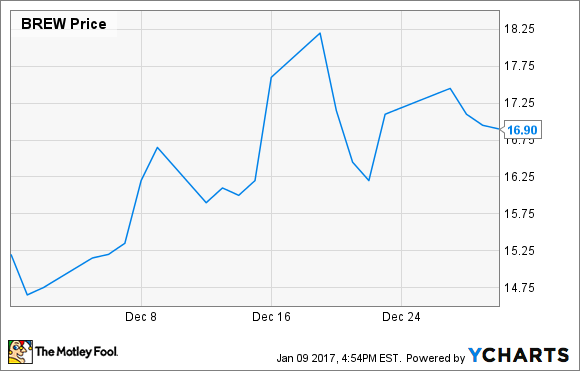 According to the deal, the Portland-based beer-maker will take a 24.5% minority stake in Wynwood in exchange for that brewer having access to CBA's state-of-the-art production facilities in order to meet growing demand in the state of Florida. The arrangement marks CBA's third such partnership, as it made similar deals with Appalachian Mountain Brewery in 2014 and Cisco Brewers in 2015. In addition, CBA also owns six brands of beer and hard cider.

CBA stock gained 12% in the two days following the announcement.

With its third strategic partnership, CBA is showing off a way for it to grow other than by acquisitions, by simply using leverage from its fixed assets and industry know-how. Concerns have grown that the craft beer market is becoming saturated, but microbrews continue to take share from macrobrews like Bud and Miller.

As CBA has been operating as a craft brewer since the 1980s, it should be able to grow its footprint through strategic alliances and other avenues to deliver results for investors.