The deal values the craft brewing company at $321 million.

Shares of Craft Brew Alliance ( BREW ) surged by more than 120% on Tuesday, following news that Anheuser-Busch InBev ( BUD -0.22% ) has agreed to buy its remaining stock at a huge premium.

AB InBev already owns a 31.2% stake in Craft Brew Alliance. It's seeking to acquire the rest of the company's stock for $16.50 per share -- a premium of 125% to CBA's closing price on Monday.

"Today's announcement represents an exciting next step in a long and successful partnership with Anheuser-Busch, whose support for the growth of our business and brands traces back over 25 years," CBA CEO Andy Thomas said in a press release. 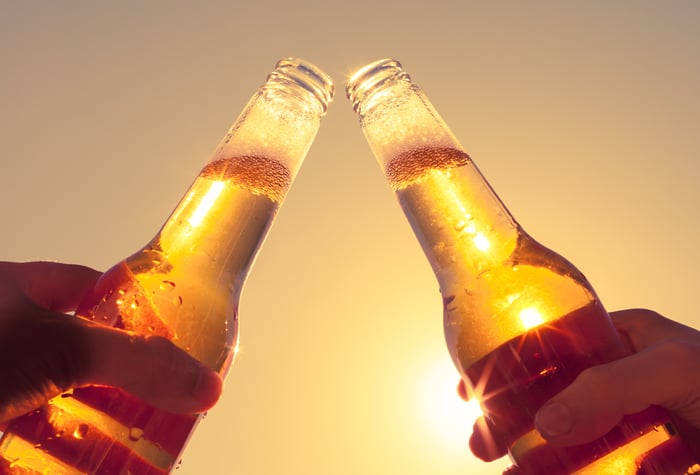 AB InBev plans to integrate CBA with its Brewers Collective, a group of craft beer breweries the company has acquired over the years.

"The beer industry in the U.S. is competitive and dynamic, with more choices available to consumers than ever before," Brewers Collective president Marcelo Michaelis said. "CBA's diverse portfolio of regional breweries and innovative lifestyle brands is an excellent complement to our family of craft partners and would continue to help fuel the growth of the craft beer category."

The integration of CBA should be relatively simple, as AB InBev's wholesaler network already distributes most of its brands, which include Kona Brewing Company, Redhook Brewery, and Square Mile Cider Co., among others.

AB InBev previously declined to exercise its option to purchase Craft Brew Alliance by Aug. 23 for $24.50 per share. Instead, it chose to pay CBA $20 million as part of an agreement the two companies signed in 2016. CBA's stock plunged in the days that followed.

AB InBev's current offer of $16.50 per share, while coming at a huge premium to CBA's closing price on Monday, is still almost 33% lower than the price it would have paid had it chosen to exercise its option in August.

In addition to the lower price, the rationale for the deal is clear. AB InBev is struggling to overcome tepid beer sales in the U.S. and other developed markets, where drinkers are increasingly choosing other alcoholic beverages such as wine. The beer giant has sought out growth in other high-growth markets such as hard seltzer and even cannabis, but these efforts have yet to move the needle for the company.

Craft beer, however, holds significant promise. While overall U.S. beer volume sales declined 1% in 2018, craft brew volume increased by 4%. Moreover, on a dollar basis, craft sales rose 7%, to $27.6 billion, and now account for nearly a quarter of the massive U.S. beer market. Anheuser-Busch InBev's bid for Craft Brew Alliance should help to bolster its growth in this increasingly important and valuable market segment.

The companies expect the deal to close in 2020, pending shareholder and regulatory approval.