People just aren't drinking beer like they used to.

Shares of Anheuser-Busch InBev (BUD -0.85%) fell more than 10% on Friday, following the release of the beer giant's third-quarter results.

AB InBev's total volumes weakened slightly in the third quarter, as declines in major markets like China and the U.S. offset growth in other markets such as Mexico and South Africa. Despite the lower volumes, price increases and initiatives designed to foster sales of premium beers helped revenue rise 2.7% when adjusted for acquisitions and divestitures, to $13.2 billion.

Still, AB InBev's earnings before interest, taxes, depreciation, and amortization (EBITDA) were flat compared to the prior-year quarter, at $5.3 billion. EBITDA margin worsened by 107 basis points to 40.2%, due in part to higher commodity costs and higher sales and marketing expenses. Analysts had expected AB InBev's EBITDA to rise by 3%. 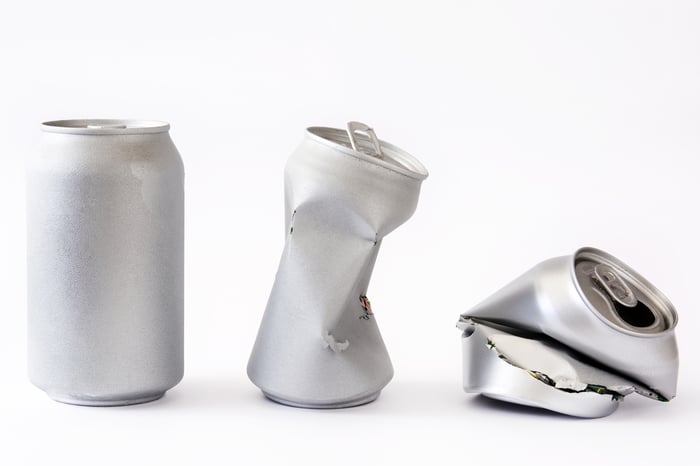 Management also braced investors for slower growth in the coming quarters. "Overall, we remain confident in our strategy and the fundamental strength of our business, though we now expect moderate EBITDA growth in FY19 given the additional headwinds faced in 3Q19 which we anticipate will continue into 4Q19," the company said in its earnings release. AB InBev previously said it expected to deliver "strong" EBITDA growth in fiscal 2019.

Anheuser-Busch InBev is struggling to find ways to offset tepid growth in many of its largest markets. The company recently returned to acquiring smaller craft-beer brands. It's also making moves into the cannabis-infused beverage market. But there's no certainty about whether these higher-growth businesses can offset slowing growth in its core beer categories. If they can't, the beer giant's stock could continue to languish.