Activity tracker maker Fitbit (NYSE:FIT) has been on a buying spree over the past year. The company has acquired Coin, Pebble, and Vector -- all of which will clearly contribute to Fitbit's smartwatch product roadmap. It seems that there was also a fourth company that Fitbit almost bought: rival Jawbone.

Financial Times reports that Fitbit approached its smaller rival late last year "in the run-up to Christmas" to discuss a possible acquisition. The two companies have been engaged in bitter competition and litigation for over a year. Fitbit had been seeking to block the import of Fitbit devices based on patent infringement, but dropped that suit just a few weeks ago mostly because Jawbone is floundering and continued litigation was likely more trouble than it's worth.

You can't even buy devices from Jawbone directly anymore.

The writing's been on the wall for years

Jawbone has been in financial turmoil for the past couple of years, laying off 15% of its staff a year ago. The company has also had trouble paying NexRep, the customer service agency it had previously worked with. Once upon a time, Jawbone was valued at $1.5 billion. That was the most recent private valuation from January 2016, when the company raised $165 million in a downround (when a funding round is done at a lower valuation than the prior funding round; in 2014, Jawbone fetched a $3 billion valuation).

Last August, Jawbone was reportedly looking to sell itself amid ongoing troubles, but Fitbit's offer was apparently so low that Jawbone balked. When Fitbit withdrew its lawsuit, it noted: "SEC filings of one of its biggest investors now value Jawbone shares as worth nothing, as well as indicate that Jawbone has filed for bankruptcy or is in default." Jawbone rejected this characterization, saying that Fitbit was "relying on speculative press reports and third-party sources rather than any information directly from Jawbone."

It's not clear which Jawbone investor Fitbit is referring to, but I was able to locate the SEC filings for GSV Capital (NASDAQ:GSVC), a publicly traded fund that invests in late-stage, venture-capital-backed private companies. GSV invested $750,000 in Jawbone back in May 2013, picking up 150,000 shares. After transaction costs, GSV's cost basis was about $793,000.

While official private valuations often occur at funding rounds, GSV estimates the fair value of its investment every quarter and discloses details around its portfolio. If you divide out its estimated fair value by its number of shares, you can calculate GSV's estimates of Jawbone private share prices. It's not pretty. 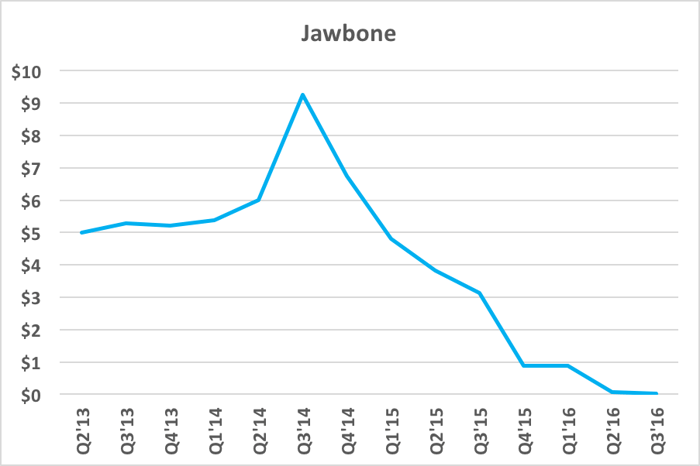 As you can see, Jawbone's value plummeted starting in late 2014 and continuing through 2015 and 2016. As of the end of Q3 2016, GSV was valuing its Jawbone position at just $2,789 -- and that's not in thousands or millions like you often see in financial statements, either. That translates into about $0.02 per share, a far cry from the peak GSV valuation of $9.25 two years prior. Within this context, it makes perfect sense that Fitbit would only be willing to entertain a paltry offer and that it probably lowballed Jawbone.

It's also unlikely that Jawbone had much in the way of assets that Fitbit would be interested in. Jawbone's Up family of wearable fitness trackers are already getting decimated by Fitbit products like the Flex and more recent Flex 2, while Fitbit's recent acquisitions are all about smartwatches and software assets needed to create a platform. Jawbone doesn't make a smartwatch, nor does it operate a platform. Fitbit probably ended up saving some money by passing

Jawbone is now looking to pivot to the clinical medical device market -- if it can survive that long, that is.