It's been a long time coming, but it finally looks like the U.S. is coming out of an industrial recession. At least it does if the latest results from MSC Industrial Direct (NYSE:MSM) are anything to go by. Industrial supply companies tend to have short sales cycles -- rendering them useful as bellwethers of change -- and MSC Industrial's positive earnings and outlook suggest the industrial sector may have bottomed. Let's take a closer look at the report.

Across a range of metrics, MSC Industrial reported a better-than-expected quarter:

As you can see, the headline numbers were good -- but more than that, there's evidence that MSC Industrial's results mark a turning of the corner in the industrial sector.

For the second quarter of 2017, management forecasts the following:

The second quarter of MSC Industrial's fiscal 2017 looks like it will mark an inflection point in the company's fortunes, and further evidence suggests it could be sustainable.

Further analysis of the earnings report

The budding shoots of recovery are best seen in the last bar of the chart below. In fact, the last time the company reported positive year-over-year growth in average daily sales was in June 2015. In a sense, it confirms the cautious optimism given in December by another industrial supply company, WESCO International. Back then, WESCO CEO John Engel called for a "modest improvement in our end markets."

It might be time for analysts to upgrade expectations at peers such as Fastenal and W.W. Grainger. 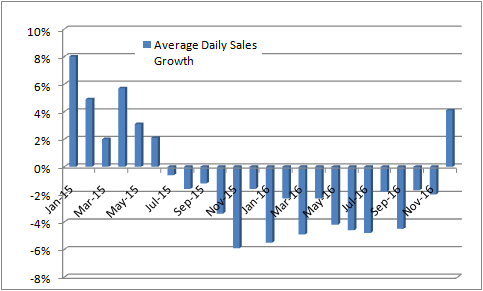 Moreover, management's commentary indicated that the cycle is turning up. For example, MSC recorded a higher mix of sales from products related to capital spending -- such as machinery and machine tool accessories.

This is important because it indicates a growing level of confidence among customers. Manufacturers typically cut capital spending in a slowdown, then aggressively increase it when the recovery comes. It's early days, but on the earnings call, management spoke of the possibility of higher-margin consumables sales increasing in the future -- as they typically do when customers start making capital spending again.

In a welcome development, CEO Erik Gershwind said, "We are certainly more positive than even a few short months ago. Even so, we would need to see sustained increases in order activity before we declare that the environment has turned." Furthermore, management even spoke of the possibility of making price increases -- a sure sign of an improvement in market conditions -- if conditions remain on a positive trend. 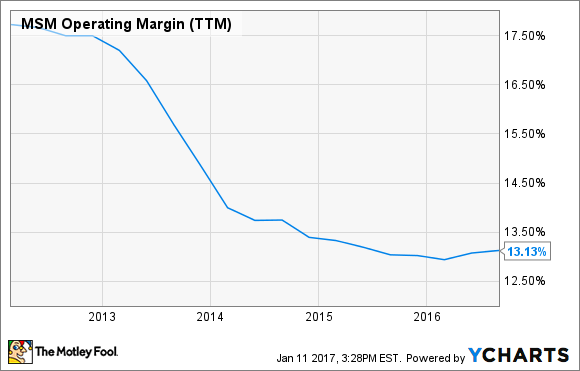 If this truly proves to be an inflection point in MSC Industrial's end markets, then investors should look forward to more increases in average daily sales, possibly supported by price increases in the future. Such things would surely help increase margins, as would an increase in consumables sales.