Sunrun (NASDAQ:RUN) has had a difficult time differentiating itself in the competitive rooftop solar market, so it's taking a new approach. The company announced a new partnership with National Grid plc (NYSE:NGG) on Tuesday, which will attempt to leverage the utility's customer base and infrastructure backbone.

There's no guarantee that the partnership will pay dividends for either company, but it's a novel approach to growing sales in residential solar today. 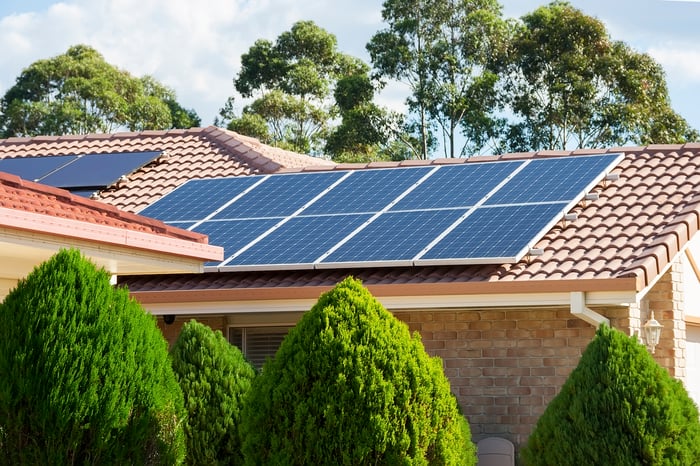 Why Sunrun and National Grid are teaming up

National Grid will initially team up to sell rooftop solar systems. Sunrun will be able to target the utility's 100,000 customers in single-family homes in New York with the hopes of quickly accessing the market. Similar partnerships have been tried before, notably by SunPower and Tesla's (NASDAQ:TSLA) SolarCity partnering with Airbnb and Home Depot. They haven't been particularly noticeable in earnings, but being able to reach thousands of customers with a utility's help has maintained allure for solar installers.

More notably, the partnership also entails National Grid committing $100 million to fund equity in 200 MW of solar projects across the country. This is beyond the tax equity or other funding Sunrun normally gets and allows the company to monetize assets earlier than in the past.

While partnering with National Grid could be an incremental positive for Sunrun's normal operations, and vice versa, the real partnership will be beyond solar system sales.

Where the partnership could help Sunrun long term

What's interesting about the partnership is that it includes a deal to look into how to create a network of distributed assets, including solar and storage, that would provide value to the grid. The press release stated it like this:

National Grid will also leverage its experience in complex energy markets to better understand the transformation occurring in the sector, and will work with Sunrun to explore options of how distributed energy resources might be aggregated and used to help keep the energy grid balanced and optimized. Currently these services are typically provided by centralized generators.

The concept of distributed assets being aggregated into a series of assets that work together is the goal of many solar companies. SolarCity's grid service solution aims to provide a series of benefits to the grid through distributed solar and energy storage assets. The company also worked with SunPower, Con Ed, and National Grid to offer a proposal that would compensate distributed assets based on local value to the grid rather than net metering. Sunrun is now going to be working on building a similar aggregated asset base using distributed resources it controls.

This is another example of utilities and solar companies working together to find ways to provide compensation to customers and value to the grid for solar and energy storage. If Sunrun and National Grid can find a way to aggregate assets together in a group and sell services from those assets, it could create more value for all parts of the value chain. And that's a positive trend for both the solar and utility industries.