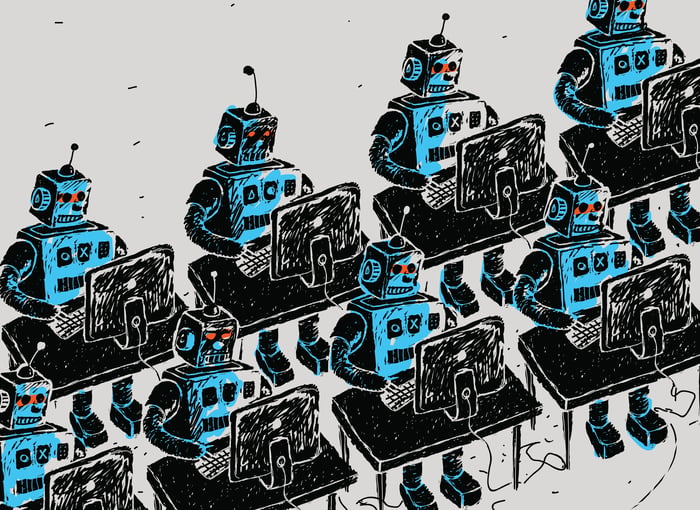 The artificial intelligence (AI) market is expected to balloon to $36.8 billion by 2025, up from just $644 million last year.

AI, like other tech segments, can seem like a hazy idea that offers lots of opportunities, but not much clarity on where to begin investing. So to help with that, here are two segments (among many) where Alphabet's (NASDAQ:GOOG) (NASDAQ:GOOGL) Google, Facebook (NASDAQ:FB), and NVIDIA (NASDAQ:NVDA) are using AI to grow their businesses.

Advertising is probably one of the least thought-of segments when it comes to artificial intelligence applications, but Facebook and Google know better. Both of these companies have made big bets on AI -- and most of them are aimed at building up their advertising businesses.

We all know that the free services we get from Google (Gmail, Google Photos, Google Drive, Search, etc.) aren't really free. Consumers pay for these with their data by giving up some of their information (what we search for, the subjects of our emails, the photos we upload, etc.), and Google takes that information and tries to serve us ads it thinks are relevant to us.

So far, the company does a pretty good job at it, considering it earned $19.8 billion in advertising last quarter. But even Google thinks it can do better, and that's why it's recently acquired 11 AI companies.

One of its most publicized AI acquisitions, a company called DeepMind, was able to beat a human at a complex strategy game called Go, and has also developed a sound-recognition program that it says mimics the human voice and sounds more natural than any other text-to-speech system. DeepMind has long-term implications for Google's AI plans, but the company is also looking to more practical AI applications right now too.

For example, the company introduced a Smart Bidding learning system last year, which is an automated bidding system for AdWords and DoubleClick customers. Smart Bidding uses machine learning that's built on the company's other AI systems for Google Assistant, Google Photos, and AlphaGo, and helps "maximize the accuracy" of ads. The company says that Smart Bidding's algorithms, "... factor in a wider range of parameters that impact performance than a single person or team could compute."

While Google is helping advertisers make more efficient bids, Facebook is using AI to better sort all the content its nearly 1.8 billion users upload to its services. Facebook is very adept at sorting this content and selling ads around it as well -- it earned $6.8 billion in adversing revenue in its most recent quarter -- but it's using AI to make improvements.

Facebook is expanding its AI presence both through its own internal research and a handful of acquisitions over the past few years. The company uses AI for facial recognition of photos its users upload, and even to figure out which stories and posts it will show in our newsfeed.

But the company also developed its own DeepText AI system which "... can understand with near-human accuracy the textual content of several thousands posts per second, spanning more than 20 languages." That's an impressive use of AI, and it shows just how much Facebook needs learning systems to sort all of the content it receives so it can better serve ads around it.

Google is doing a lot in the self-driving car space, of course (particularly with its new Waymo company) -- but let's turn our attention toward NVIDIA for this section.

The GPU-maker earns most of its revenues from its dominant position in the gaming market, but NVIDIA's focus on artificial intelligence is helping to pave the way for self-driving transportation.

NVIDIA's Drive PX 2 self-driving supercomputer uses AI technology to collect 1.8 million data points per second and then process that information in a way that tells the car what objects are around it and how to respond to them. Drive PX is already used by 80 automakers and automotive suppliers, but the company isn't stopping there.

NVIDIA has a powerful cloud-based supercomputer called DGX-1 that it says could eventually help off-load some of Drive PX's AI processing and make self-driving cars even smarter. DGX-1 uses neural networking to process information in similar ways to what humans do, and is 12 times faster than previous GPU-powerd AI supercomputers. That's becoming increasingly important, because between now and 2035 there will be 76 million vehicles worldwide with some level of autonomy.

All of the companies listed above are leaders in the AI space, and each is continuing to make huge strides. Facebook, Alphabet, and NVIDIA aren't exclusively AI companies, of course, but each is creating huge opportunities for their own businesses, and investors should take note.

Knowing where to begin with AI investments may seem like a daunting task, but betting on key technology players that are already implementing AI to grow their businesses is a great place to start.