Bank of Marin (NASDAQ:BMRC) has shot up about 40% in value in the past 2 months. Low expenses are one of the reasons for the recent growth, and free checking accounts are a big part of this.

Free checking accounts routinely waive maintenance fees if your balance is over a certain amount, making them effectively free for customers. But that can come at the expense of receiving interest payments. Many customers don't realize it, but banks get the better end of the deal from free checking because it gives them a cheap source of capital -- something that Bank of Marin has taken advantage of.

Banks make money on the difference between long-term interest (money they loan out) and short-term interest (money they borrow). When banks loan out money to finance a home or business, they have to first borrow that money at a lower rate. That money can come from deposits (like checking or savings accounts) or a short term loan (like a CD). Any lowering of the interest banks pay increases their profit on the loan.

Bank of Marin has moved toward interest free checking accounts because they are the cheapest source of funds: 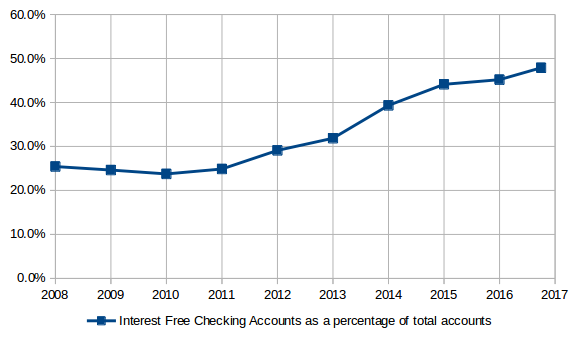 With a checking account, a customer can demand the entire balance of their account at any time. This can potentially create a scenario where too many customers need withdrawals at the same time, which is known as a bank run (think of It's a Wonderful Life). Banks don't like the potentially volatile nature of these accounts, but they love the fact that free checking accounts pay no interest.

Every business will need two things from a bank:

By keeping abreast of their customers' needs, BMRC makes the loan approval process relatively easy. This ease of access to bank services can be worth more than a small 0.25% interest rate available elsewhere. What good is an extra 0.25% if you can't access your banker when you need them?

These low-cost and no-cost funds contribute to a bank's bottom line through the net interest margin. This is the difference between interest income and expenses, divided by total interest-bearing assets. Expressed as a percentage, it shows how much more a bank makes in interest than it pays out in interest.

Obviously paying out 0% on interest free checking accounts is a big advantage, because the alternative is paying interest on savings accounts or short term loans. 0% is the lowest rate a bank can procure funds at.  Because of current low interest rates on commercial real estate and home loans, this advantage has not yet translated into higher margins for BMRC because customers aren't paying that much interest on their loans.

After the recession, BMRC's net interest margin decreased an entire percent. Since 2014, the reduction in NIM has slowed considerably. This timeline corresponds with the graph of interest free checking accounts from earlier. 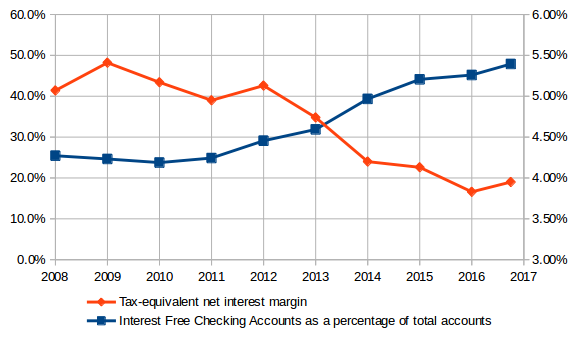 In 2014, these interest free accounts increased to make up about 40% of accounts. At the same time, BMRC's net interest margin slowed its contraction. It stabilized around 4% over the next few years. Having a free source of funds clearly helped Bank of Marin a lot!

Now that the Federal Reserve has finally increased interest rates, interest on loans should start to increase. The Fed increased the federal funds rate at the end of 2015 and 2016. If Bank of Marin can keep paying their customers 0% interest on their checking accounts, this can appear as an increased net interest margin.

It's a good sign that BMRC still managed to increase its percent of interest free checking accounts over 2016, even after the Fed raised interest rates. A large amount of low-cost funds can allow Bank of Marin to take advantage of the higher federal interest rates, translating them into profits by increasing the NIM.

How BMRC reacts to increasing interest rates, and how their customers react, should be watched in the future. I suspect that if interest rates rise slowly, as they are expected to do, the percentage of interest free checking accounts should stabilize between 45% and 50%. This will give Bank of Marin a nice cushion of free borrowing to support an increased net interest margin. This small bank should be on investor's watch lists if they like regional financial options.